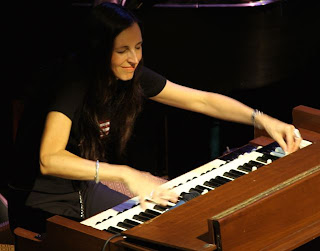 Dennerlein is in Minneapolis attending the American Guild of Organists convention, which is why we’re hearing this phenomenal artist who makes her home in Germany. She’s at the Dakota for one night only. Lucky us, we’ll have another chance to see her later this year; she’ll be at the Monterey Jazz Festival in September.

Most of my live B-3 listening has been with Joey De Francesco and Dr. Lonnie Smith, each exceptional and outrageous in his own way. Dennerlein is a completely different experience. She’s small but strong. She swings hard. She exudes more joy than attitude (not that I’m complaining about attitude from B-3 players, I’m just saying). And she plays the pedals as if her feet were fingers, with that much dexterity and speed. I wished I had a clear view of her feet because it seemed she had more than just two.

We hear mostly original compositions: “Fly Away,” the slow blues “Farewell to Old Friends,” “Let’s Swing the Blondes” (a phrase she heard in Arizona and liked). She makes the lower registers on the upper keyboards thump and moan. 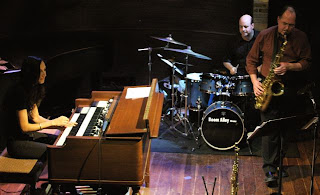 Part of the magic of live jazz is seeing how musicians respond to each other. Whitman plays kind of crazy tonight, wilder than I’ve heard him up to now. Pulice is right there, keeping up and keeping time and taking off on his own adventures. I’m guessing these three have never played together before and probably won’t ever again. It’s all in the moment.

Near the end of the evening, Dennerlein tells us how comfortable she feels at the Dakota (“it’s like a living room”) and how she started playing organ at age 11, by chance, when her grandfather gave her an organ as a Christmas present. “My father feared my grandfather would give me a flute,” she explains, “and he suggested the organ.” But her Christmas organ was small, with just one keyboard and no pedals. She had heard the B-3 and that’s what she wanted. “So my poor parents had to go to shop again and buy a bigger organ.” Her final tune, “Grandfather’s Funk” is a danke to her grandfather, full of blaps and exclamations and runs and sass, liberally salted with jazz quotes.

We meet her afterward in the lobby and she’s warm and charming. Most of the CDs she brought with her from Germany have already sold; I’m intrigued by Spiritual Movement No. 1. It’s jazz on the big, bad Goll pipe organ at St. Martin’s Church in Memmingen. Some might think it sacrilegious but as I listen to it later at home, I think Bach would have loved it to pieces.

Photos by John Whiting.
Posted by Pamela Espeland at 9:00 AM