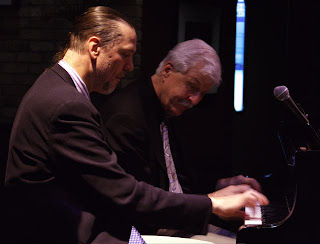 For fans of stride piano (think melodies on the right hand, beats on the left; think Fats Waller), there was no better place on the planet to be than the Dakota on Tuesday night during the Twin Cities Jazz Festival. Three great pianists, two pianos, and a full house of enthusiastic listeners.

Butch Thompson opened the first set solo, Asaro the second, Weber the third, but each set evolved into a duo or trio. As he does on his Jazz Originals radio show, Thompson introduced each tune he played by telling us about it—who wrote it and when, plus a story or two. Asaro told us about Donald Lambert (“born the same year as Fats Waller, he never achieved fame except among musicians”). Weber asked us which key we wanted him to play in, which piano we wanted him to sit at, and how many flats he should play. (“Seven? Okay, seven.”) 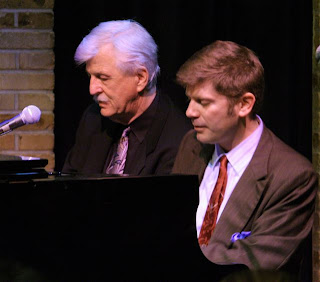 The songs kept coming: by Eubie Blake, Fats Waller (“Squeeze Me,” “Your Feet’s Too Big”), James P. Johnson (“the Louis Armstrong of piano,” Thompson said), and Willie “The Lion” Smith. We heard Jelly Roll Morton’s “Pearls” (“not stride by strict definition,” Thompson explained, “but one of the building blocks of jazz”), “Jeepers Creepers” (all three men played this one—piano six hands), “A Cheerful Little Earful” by Harry Warren and Ira Gershwin, and George Gershwin’s “Slap That Bass.” A tune called “I Wish That I Were Twins, You Great Big Babykins.” And so many more. Weber told the audience, “You go to a jazz concert, you don’t know what you’re going to get. It’s all spontooneous.”

Two pianos and three men (two quite tall—Weber and Thompson are both well over 6 feet) led to some interesting and occasionally alarming games of musical chairs. All three ran back and forth between pianos. One piano had a bench, and often two men would crowd onto it, one playing the melody and the other playing the beat. The other piano had two chairs, one of which was perilously near the edge of the stage. An alert man from the audience kept going up to make sure neither Thompson nor Weber took the plunge. 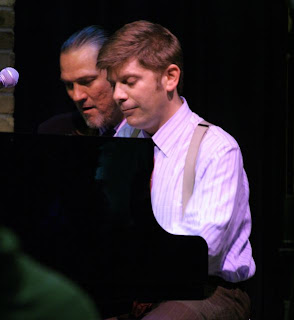 During a break, Weber told me, “If all the electricity went out forever, stride pianists would be just fine.” I’m not exactly sure what he meant by that, but I think it had something to do with playing music that makes people happy.

Photos by John Whiting. Top to bottom: Weber and Thompson; Thompson and Asaro; Weber and Asaro.