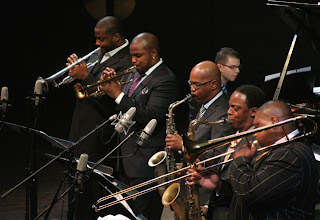 Koransky, editor of DownBeat magazine, introduces an all-star line-up with a five-horn frontline. I’m happy even before the music starts. Jones takes the first solo, Osby the second, Pelt the third while the rest of the musicians lay down a bed of sound for the soloists to jump up and down on.

Stryker’s “24 for Elvin” leads into an arrangement by Pelt of “Mack the Knife” that’s smooth as steel. A tune by Strickland (twin brother to Ravi Coltrane’s drummer E.J.) called “Sesame Street” is not the familiar Toots version. Strickland’s arrangement of “Over the Rainbow” makes an old song sound fresh. Everything we are hearing tonight, Jones tells us, was composed or arranged by one of the musicians on stage. 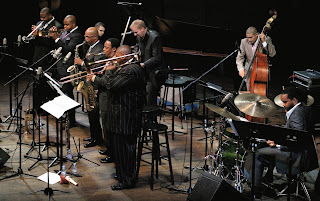 The music is wonderful, the musicians are stellar (these are all guys I would go to see in NYC), but the sound is murky and indistinct. At times I can’t even hear the rhythm section (piano, bass, drums). Is it the hall? I hope not, given the quantity (and quality) of jazz coming to Orchestra Hall within the next year. But this isn’t the first time I’ve felt the sound in the big box left something to be desired.

The second set kicks things up a notch. On Osby’s “Next Time Not,” Gordon’s trombone is double-muted and has a conversation with itself. The ballad of the evening, Ellington’s “In a Sentimental Mood,” is a knockout. It begins with a lovely solo of improvised thoughts by Jones, whose horn then climbs the six short steps to the high note:

The rhythm section comes in on the start of the second measure to set the beat, Pelt steps up with his flugelhorn, and suddenly I can hear every note each musician plays. Have we stumbled on the perfect jazz configuration for this hall—the quintet? Toward the end, during his closing solo, Pelt leans back and points his horn up and sends the sound into the farthest corners, like golden ribbons. Calvaire adds a roll with his mallets and they’re done. Perfection.

A final tune by Stryker is fast and tight; the drums are fierce and the horns ride up and down together. In the time-honored jazz tradition, the drummer takes a solo and the band goes out with a bang.

Earlier Jones took a moment to thank Lilly Schwartz, Orchestra Hall’s director of pops and presentations, for “having the vision to bring a group like this into a hall like this. It happens a lot in Europe but not here, and it’s about time, don’t you think?”

Photos by John Whiting. He was there as the official (if unpaid) Orchestra Hall photographer, and one of his photos was published in the September issue of DownBeat magazine. Yay John!

Posted by Pamela Espeland at 8:30 AM