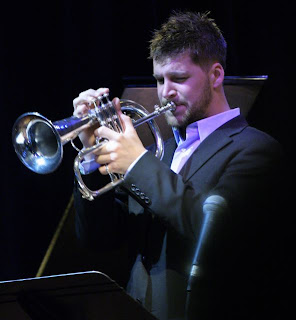 Taylor Eigsti writes about his feelings; John Raymond shares them with the audience during live performance. Introducing an original composition called “The Poor Blind Man,” Raymond explains that it’s not about a man who is physically blind and has no money, but about a man who can see and is wealthy but doesn’t see the right things, the right truths, or the right goals. It's foolish to think that wealth can make us happy, he says. It’s a bit didactic for an early-evening jazz show but the tune, a pensive ballad with Raymond on flugelhorn, backs it up and Raymond's words give you something to think about as you listen. I like it when musicians tell us something about their music, especially original works, though some people wish they would shut up and play. 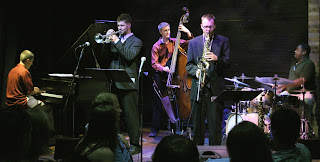 I’m here after a meeting and stay for just the first set and part of the second, but it’s lively and enjoyable, a tight quintet playing solid straight-ahead jazz: Monk’s “Trinkle Trinkle,” Joe Henderson’s “Recordame,” Raymond’s original, a blues, a playful tune by Hedenstrom called “Think About It.” The Hedenstrom piece is especially interesting: slower measures followed by doubletime, slow, doubletime, slow, doubletime. I don’t think it has been recorded but I’d like to hear it again.