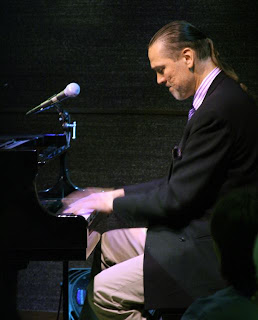 Pianist Jon Weber is a prodigious and profligate quoter. While playing one tune, he’ll toss in phrases from others—sometimes many others, and they're not always jazz tunes. He has a vast library of all kinds of songs stored in his head and I imagine tiny creatures running around up there, pulling volumes from shelves at a furious pace and tossing them down to other tiny creatures waiting at Weber’s fingertips.

While interviewing Weber for a MinnPost profile, I asked, “How do quotes happen?” He said:

“I guess if you’re playing and if you’re familiar enough with a given tune and its harmonic structure and you pretty much know where the 32 bars are going to be and the 12 bars, you know the form blindfolded in your sleep…instinctively, you start to look for more things to do. It’s like I want to juggle an extra chain saw, carry on a conversation, or add another intellectual process. It’s a form of human expression…. Sometimes songs remind you of other songs, you tangentially go from one to the next, and you want to include it…. Imagine a Quote Meter. You want to tempt fate and see if you can add one more. It’s fun. You do it for the other musicians and anybody else who knows and shares your repertoire…. The older and hokier the tune, the funnier it is, if you can sneak something in that’s so silly it doesn’t belong there. A trombone player and I used to have a gig at a Hyatt and we played this game we called ‘That Has No Business Being In There.’ We’d sneak in a quote from ‘The Beverly Hillbillies,’ just enough that people got it.”

Read a review of a Jon Weber show at the Artists' Quarter in January.
Photo by John Whiting.
Posted by Pamela Espeland at 9:00 AM