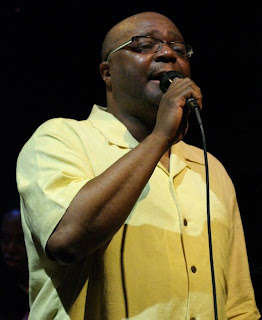 It’s a bittersweet celebration: Bruce Henry’s final public performance in Minneapolis before moving to Chicago. It’s not that he won’t be back—he’s already scheduled to play a free concert on Peavey Plaza on July 23—but it’s not the same as having him here with us.

He gives us songs we love: “Let the Good Times Roll,” “Autumn Leaves” (a fiery solo by McGraw, a falsetto verse by Henry), “Africa Cries” (Henry’s own composition, always achingly beautiful), “Billy’s Bounce,” “Mighty Mighty” (another Henry original, this time with a killer solo by “Kilowatt” Washington), “Hearts Afire” (during which the audience joins in to sing “Keep your head to the sky”). He invites his Freedom Train group on stage—including Debbie Duncan and Katie Gearty—to sing “It’s a Party” (“a freedom party!”). Every minute of this night is a party, with tables crowded together and every table full and people standing in doorways and at the bar. Other musicians have come to pay tribute: Mary Louise Knutson, Connie Olson, Rhonda Laurie. 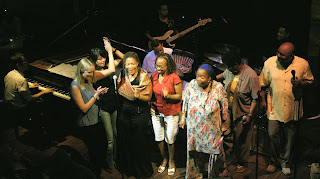 After the break: “Hallelujah!” Then “Jump That Broom.” The crowd is growing. People are dancing. Debbie Duncan and Gwen Matthews are summoned to the stage. “We used to have a group,” Henry tells us. “It was called Henry Duncan Matthews. They put my name first because I was youngest.” The three sing “Everything must change, nothing stays the same/Everyone will change, no one stays the same” and Matthews is crying. For the next tune, Ginger Commodore, Connie Olson, Katie Gearty, and Yolanda Bruce join in for “Sweet Home Chicago” and change the lyrics to “Hey Hey Bruce, don’t go.” 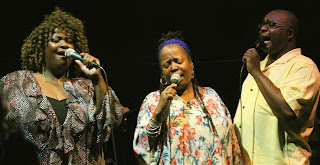 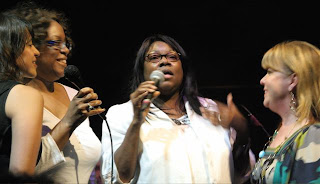 For his final song, we wonder if we’ll hear “Nature Boy” or “The House of the Rising Sun,” two famous tunes Henry has made his own and each one a showstopper. Instead, we hear a song he has promised to someone in the audience: “The Second Time Around.” Accompanied by saxophone, it’s gorgeous, a singer’s song, with low, deep notes and caressing vibrato. Is it for his wife? It feels very private in a room packed with people who are hushed and listening hard.

Posted by Pamela Espeland at 6:00 PM