Party with B-3 and Trumpet and Cake 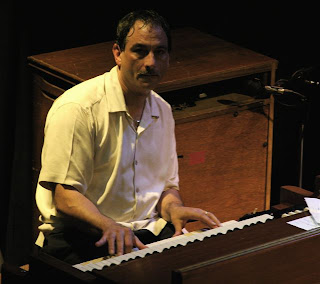 After the DownBeat's Rising Stars show at Orchestra Hall, we go to the Dakota for HH's birthday party. The mezzanine is mostly ours. Friends are there to greet us, a lovely chocolate cake from Wuollet Bakery awaits us (it says "Happy Birthday" to both HH and Rhonda Laurie, who shares his birthday), the splendid Joe Doermann is there to take care of us, Jon Weber has just finished his final set and comes upstairs to join us, and Tony Monaco is starting his late-night performance (a preview of the show he'll do for the Twin Cities Jazz Festival tomorrow night). It's a party. 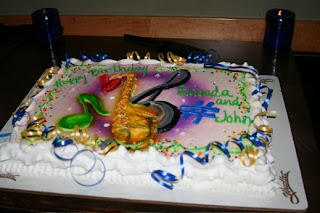 Monaco was mentored by Jimmy Smith and Joey De Francesco; the Heatin' System was Jack McDuff's band. One of my jazz regrets is I never saw McDuff in person. He often played at the Artists' Quarter; he died in Minneapolis in 2001.

I'm not taking notes tonight so I can't report on the specifics of what Monaco played but it's hot. Burnin'. Fiery. All the things the writers say about this strange and complicated instrument when it's in the hands (and feet) of an expert. I hang over the rail to watch and listen.

The DownBeat's Rising Stars band comes to the Dakota and they all have cake. During a break between Monaco's sets, Sean Jones plays "Happy Birthday" to HH as a trumpet solo. (Thanks so much to Don Berryman for capturing this for us.) Then, during Monaco's second set, Jones, Wycliffe Gordon, and Dave Stryker all sit in with his band.

We close the Dakota and go to The King & I Thai restaurant for a nightcap. We arrive home very late—to quote Billy Strayhorn, "halfway to dawn."

Posted by Pamela Espeland at 5:53 PM