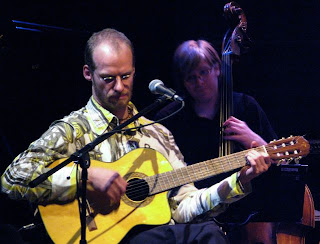 After leaving the Orpheum and RTF, we go to the Dakota for Robert Everest and his group Expedition. I’ve heard Everest just once before, maybe at Rossi’s? He’s a serious student of guitar in mainly Latin styles, our resident Caetano Veloso. Expedition plays all kinds of music: Latin American, Brazilian funk, jazz, Mediterranean, Cuban, Mexican. 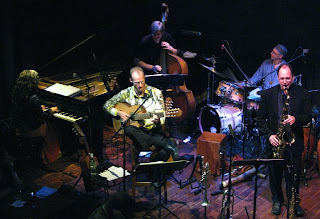 We hear “Girl from Ipanema,” a tune from Ry Cooder’s Buena Vista Social Club, “Beyond the Sea” (written by Charles Trenet, originally “La Mer,” made famous here by Bobby Darrin; Everest sings it in French), tunes from Cuba and Brazil and Barcelona. Songs with melody and flavor and rhythm, nicely played and often sung in Everest’s clear tenor with a touch of vibrato. Knutson joins the band for “Sambado Brado” (?), a novel arrangement of “On the Street Where You Live,” Jobim’s “Chovendo na Roseira (Raining in the Rose Garden)” and “Double Rainbow” (Everest sings it in Portuguese), a Senagalese tune (with Whitman on soprano sax), and, of all things, “Misty.” Beautiful, accessible music, very well done. Expedition returns to the Dakota on July 24; Mary Louise will be there all night.

Posted by Pamela Espeland at 7:45 AM