The 10th Annual Twin Cities Jazz Festival officially began on Wednesday, June 18, with a poster release party at Your Art’s Desire gallery in Minnetonka. We went and it was awfully far to drive but worth meeting Minneapolis artist Christopher E. Harrison, whose colorful cut-paper collages translate well into posters. The festival continued on Thursday, June 19, with Return to Forever at the Orpheum in Minneapolis. But for many people, it really began at Mears Park on Friday when this great Latin band played a free outdoor concert starting at 8:30. (The Twin Cities group Salsabrosa opened, starting at 6.) We brought our lawn chairs, found a parking spot nearby, and enjoyed the perfect weather and the driving, rhythmic music—right up to 10 p.m., when a festival official walked on stage and told the band they would have to stop playing now as in N-O-W because of St. Paul’s noise ordinances. Gonzalez was clearly miffed at being interrupted mid-tune. They ended awkwardly. Gonzalez started to introduce the musicians, then stopped mid-sentence and walked off stage. None of them showed up later at the AQ’s jazz jam. 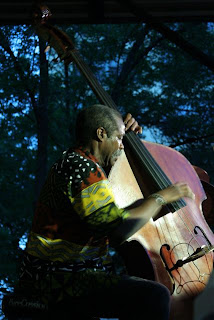 Side notes: 1) Andy Gonzalez, the band's regular bass player, was recently diagnosed with diabetes and had to have foot surgery; Alex Blake took his place. We most recently saw Blake with Randy Weston. He has the most unusual style of playing I have ever seen: seated behind the bass, as if it were a cello on steroids, he strums and slaps the strings. 2) Former New Yorker Jerry Gonzalez now lives in Madrid. The movie Calle 54 made him famous in Spain so he moved there. (Source: Britt Robson's Strib preview.) 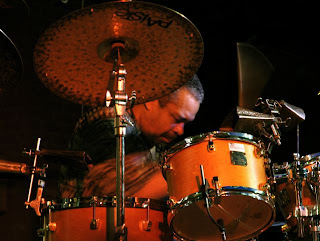 Posted by Pamela Espeland at 7:45 AM