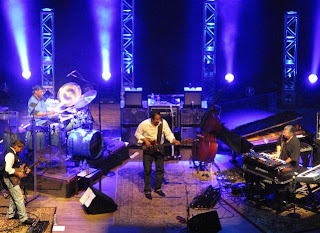 I never got into Return to Forever. I don’t own a single RTF CD, not even an LP. But their 2008 reunion tour is a very big deal, selling lots of tickets and getting rave reviews. So we buy the least expensive tickets available ($45 nosebleed seats, second to last row in the balcony in a hall that holds 2600) and bring our binoculars.

What have they been doing in the 25 years since they disbanded? White tells us: "Stanley has been mowing lawns. I've had a paper route. Chick is doing some teaching, and Al is making pasta."

The stage is a thicket of wires and control boards. White sits behind plexi panels in the back; Corea is encircled by keyboards, like Oz the Great and Terrible. Di Meola looks small compared to Clarke, who looks very tall. The music is loud, the light show trippy, and the crowd ecstatic, all except for the row right behind us (the very last row in the balcony) which keeps up a constant stream of chatter in German. (Note to self: Learn to say “Would you mind awfully much shutting your pie hole?” in several languages.) I don't know any of the tunes they play. Drums pound and guitars wail and keyboards go eeee-ooo-eeee. I'm bored. I think about the times when I’ve seen Corea at the Dakota, and Di Meola, and how much I enjoyed them. We leave at intermission. 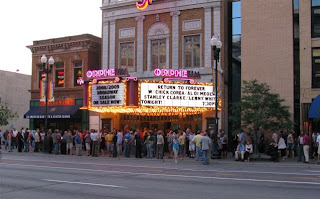 P.S. I heard later from people who stayed that the second set was completely different, all-acoustic, transcendent and indelible. Oh well.

Photos by John Whiting. Top photo taken from the very back of the hall by a man with a steady hand.

Posted by Pamela Espeland at 7:30 AM