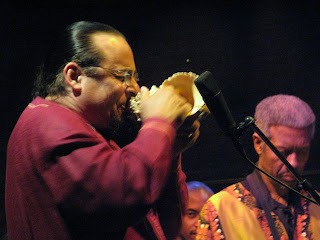 Twelve musicians, multiple instruments, one smallish stage. “The shells are the roots of the brass,” Turre says. Curvy, creamy, fragile, each once housed a living creature—a sea snail—somewhere in the South Pacific. The spiky ends have been replaced by mouthpieces. The musicians use their hands to shape the notes, sliding them in and out of the curved opening; the hand is like a mute in the bell of a horn. The sound is looser than a horn; the notes are distinguishable as notes but less precise, more open and ethereal. Later in the set Turre explains, “The same mouthpiece I use on trombone is on the shells, but there’s no little throat so it takes more air. It’s the same thing but it’s not.” One band member audibly remarks, “It hurts more!” 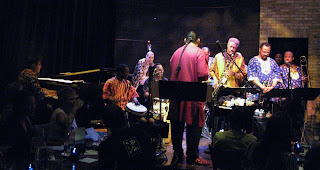 We hear “The Emperor,” a lengthy tone poem during which, Turre says by way of introduction, “various lords of their instruments will be introduced, and each instrument will tell a story.” Throughout the set, Turre is maestro, composer and leader. He plays trombone and shells, sometimes two shells at once, or he blows the trombone he holds in his right hand and conducts with the shell he holds in his left. He plays maracas and cowbell and block. He’s a one-man band of things you blow and shake and hit with a stick. For “Body and Soul,” he puts two mutes in his trombone and sounds like Louis Armstrong singing. Much of the music seems tightly arranged, but with room for individuals to stretch out in solos. For “The Rhythm Within,” it’s all about shells. The music is amazing, densely layered yet full of breath. Symphonic. Beautiful. How is it possible I'm hearing this in a club instead of a concert hall? I now believe the angels in heaven play conch shells.

When you visit Turre’s Web site, the music you hear is “Exploration” from Sanctified Shells(1993). You can go to the Recordings page on his site and hear selections from several CDs. Video by Don Berryman. View more photos at Steve Turre Is Cool.
Posted by Pamela Espeland at 7:00 AM