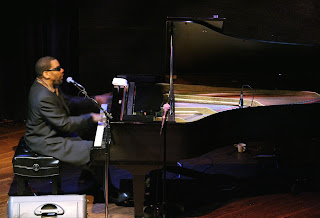 Henry Butler has a wicked sense of humor. “I’m going to talk to you tonight about the intricacies of playing ‘Three Blind Mice,’” he tells us. Butler has been blind since birth. “I helped W.C. Handy write ‘The St. Louis Blues,’” he claims. Handy’s tune was published in 1914; the best I can tell, Butler was in high school in the 1970s. “They have great sorbet here,” he says of the Dakota’s restaurant. “Put a little crack in it, a little cocaine…tastes good.” He laughs. We’re not sure if we should.

The music is sublime. Butler’s version of “The Entertainer” is a layer cake of sounds, making every other version sound simple and plain. “St. Louis Blues” is dense with runs and flourishes and trinkle-trinkles. A dozen notes crowd into the space usually occupied by one or two. Butler takes giant boogie-woogie strides, then adds unexpected bumps and grinds. He stomps out rhythms with his feet; I can't see to be sure, but I don’t think he uses the pedals. He sings: “Something You Got Makes Me Stay Home at Night,” “Working in a Coal Mine” (with thunderous piano), “CC Rider” (who knew this song had so many notes), the Professor Longhair tune, “Mardi Gras.” The old favorite “Mother-in-Law,” during which he invites us all to sing along. “High Heel Sneakers” (“Put on your red dress, baby, ’cause we’re going out tonight”). Billy Preston’s “Will It Go Round in Circles” (“I’ve got a song, I ain’t got no melody”). Bluesy, rollicking, soulful stuff, damn fine even if we Minnesotans don’t get Butler’s jokes.

Posted by Pamela Espeland at 8:15 AM