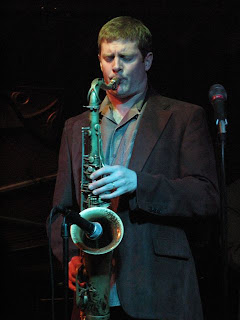 Live music deprived, craving jazz, we head straight to the AQ on our second night back in town. (Flying home from Orlando in a full, grimy plane with crying babies and children who stuck things up their noses wore us out for the first night.) Can't imagine a better welcome home than tenor sax monster Alexander and "musician's musician" Hazeltine (that's TINE with a long a, not TEEN). We hear "Alone Together," "Sweet and Lovely," and Jobim's "O Grande Amor." Alexander and Hazeltine play together a lot in NYC and it shows in their simpatico. 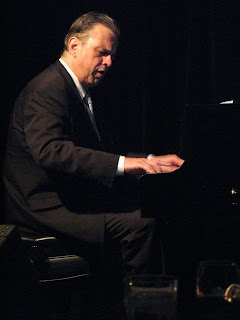 Jimmy Webb's "Didn't We" gets a flashy, splashy piano intro followed by mellow, buttery sax. Alexander takes an unaccompanied solo in the middle, lengthy and ruminative and satisfying. I want him to keep playing. It's a big dose of Vitamin J.

On the low-down, dirty "Kansas City Blues," his serene bassmaster Lewis takes a solo (he later says he's surprised it went on for so long) and it's splendid. The sax bleats, the piano rumbles, the drums beat a steady rhythm and the group segues right into a speedy "The Song Is You." Kenny plays a bashy solo and that's it for the set. 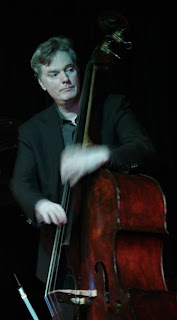 Jon Weber and Bill Carrothers have trained me to stay alert for quotes. I don't hear any in Alexander's playing. Maybe I just don't know what he's quoting; it all sounds like pure invention to me. I ask him about this later and he says he doesn't quote much. "Should I quote more?" he asks. No, please, just keep doing that warm, golden, swinging, shining hard-bop thing you do.

Photo of Tom Lewis by John Whiting.
Posted by Pamela Espeland at 1:32 PM