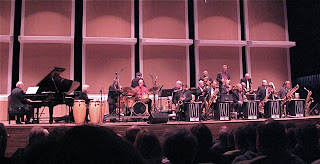 Jerry Swanberg promised the MVBB's sound would be huge and it was. When 25 musicians blow brass at the same time, you feel the breeze.

This was the final concert of the 2007–08 Northrop Jazz Season, and it wasn't my favorite. I almost wrote "I'm not a big fan of big bands," but that's not true; I enjoy the JazzMN Big Band, and the Northrop season has featured several big bands and jazz orchestras over the years: the Dave Holland Big Band in 2002–03; the Carla Bley Big Band, Chico O'Farill's Afro Cuban Jazz Orchestra, and the Mingus Big Band in 2003–04; the Spanish Harlem Orchestra and Maria Schneider Orchestra in 2005–06. Those were all good shows, with up-to-the-minute music.

Even the Mingus Big Band, which has a similar mission to that of the MVBB—to honor and sustain the music of a composer and musician who died several years ago—never sounded stale. (Kenton and Mingus both died in the same year, 1979.) But while Vax insisted "this is not a ghost band" and "fifty percent of everything we play on the road is new, written by band members in the Kenton style," it felt like an old band, and not just because most of the band members are over 60. (Ahmad Jamal is 78, Randy Weston is 82, Dave Brubeck is 88, Roy Haynes is 82...there's a long list of jazz artists who are up there in age and still vital in terms of what they play.) It felt like an old band because they were corny. They told corny jokes and did corny things like spread out into the audience to play. (HH said that reminded him of the time he was trapped in the downstairs bathroom with bees.) 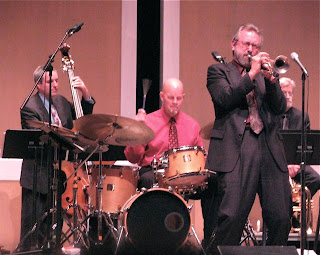 The music didn't thrill me: "Baubles, Bangles and Beads," "You Are So Beautiful." I did like their version of "In a Sentimental Mood" with its long trumpet solo. Often, the rhythm section was buried by the brass; I'm not sure I ever heard the piano, and I know I never heard the congas. 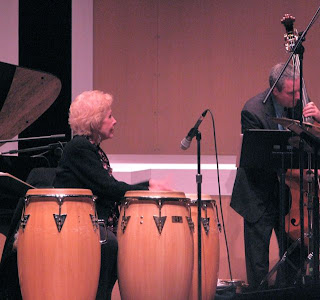 To be fair, plenty of people enjoyed the show, and there were certainly Kentonites in the crowd. When band members asked how many had heard Stan Kenton live, how many knew the London album, how many remembered a night at the late Prom ballroom when there was so much snow the band almost didn't make it, and how many recognized the "boat quotes" in one of the tunes, hands went up all around. And there were shouts of recognition and approval throughout the first set. (We didn't stay for the second.)

The Northrop Jazz Season has always been about variety and taking chances. The 2007–08 lineup also included Pat Metheny, Bill Frisell, Steven Bernstein, Ramsey Lewis, Ravi Coltrane, and Roy Haynes. So Mike Vax didn't rock my world, no big deal. It was a good year and I'll continue to subscribe.
Posted by Pamela Espeland at 9:25 AM