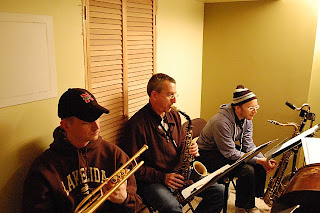 I don't know why it has taken me so long to point toward the Jazz is NOW! Web site—my bad. I wrote about Jeremy Walker and the return of Jazz is NOW! for MinnPost in March. The site had not yet launched then (or had just barely launched) but now it's up and in full swing, with lots of good stuff: videos from the December 7 performance of Matt Wilson's Carl Sandburg Project (which I also wrote about), videos from the March 13 performance at the Minnesota Opera Center and the March 12 rehearsal the day before (it's really fun to watch the rehearsal videos, if you like going behind the scenes), music to listen to or download (for free or, your choice, a small, tax-deductible donation), scores and charts to download in PDF form, photos, a blog, and more. Go there, wander, listen, watch, and learn about a jazz nonprofit that's exciting, evolving, and deeply interesting. Could it become the Minneapolis/St. Paul equivalent of the SF Jazz Collective? I'd like to think so. Their next live performance is June 12.

Words from one of Jeremy's blog entries:

If you heard us play on March 13, you heard the very beginnings. The music we played was partially finished. That performance was part of the finishing work. Jazz is great that way, finish work happens live, in front of an audience. Guys playing something surprising and it becomes part of a living song.

Email ThisBlogThis!Share to TwitterShare to FacebookShare to Pinterest
Labels: jazz, Jazz is NOW