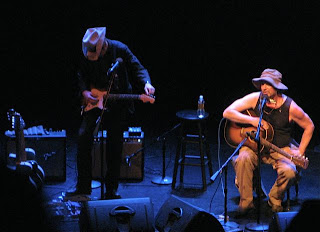 When: 5/2/08
Where: Fitzgerald Theater
Who: The Pines (opener), Greg Brown (voice and guitar), Bo Ramsey (guitar)

Folk music is not my thing (and don’t get me started on musicals) but there are exceptions and Greg Brown is one. I’ve heard about him for years, occasionally catch him on the radio, and have a couple of his older CDs, In the Dark with You (1985) and Poet Game (1994). He comes around from time to time and always sells out his venue. When I learned he’d be at the Fitz (thanks to the theater’s monthly e-newsletter) I ordered tickets ASAP and still ended up in a back balcony. Luckily it's a small theater.

The Pines open. Dave Huckfelt and Benson Ramsey (son of Bo Ramsey, Brown’s producer and sideman) play tunes of their own from their Red House Records debut, Sparrows in the Bell. “As part of our contract with Greg Brown, we have to play a folk song that’s at least 75 years old,” Ramsey says at one point so we also hear Mississippi John Hurt’s “Spike Driver Blues.” They play a new song, “Coat of Arms,” with a memorable line: “And Jesus on the cross hangs ever further to the right.” Young Ramsey is a bit too nasal and Dylanesque for me. Other reviewers have called them “starkly poetic” (Strib) and “haunting” (Rift). I’ll just say I mostly enjoy this singing/songwriting/guitar-playing/hat-wearing duo.

Greg Brown is riveting. He looks like a bum (our friend Ellen says he looks like an old miner) but I love how he sounds—dark, grumbly, rumbly, the human equivalent of low brass.

I’ve heard Brown doesn't decide ahead of time what he’s going to perform during a show; it depends on how he and the audience are feeling, on his mood and ours. Tonight we hear “Cold and Dark and Wet” (“I fell in love like a drunk in a pond/That twisted gal of whom I was fond/She found a new man on the Internet/Wham I’m spam and it’s cold and dark and wet”), “Kokomo,” “Small Dark Movie” (“You leave whatever happened last night/like a cigarette in a champagne glass”), “Oily Boys,” “The Evening Call” (“She kept her cool, but after midnight she burned”), and the wonderful “One Wrong Turn” (which happens to be on The Poet Game so it’s one I know going in).

He shapes his words in unexpected ways, drawing out syllables over several notes, gliding up and diving down on the same long vowel. He quotes Mary McCarthy: “Religion is only good for good people.” He hooks me.

Bo Ramsey is a long tall drink of black-clad cowboy in a straw Stetson. You almost never see his face, and when you do catch a glimpse, you notice he’s wearing big black sunglasses. He may be shy about looking right at you but he moves his body like he’s alone on stage, swaying and bending and stomping his skinny Dwight Yoakam legs. 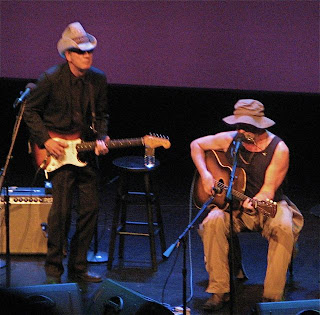 Brown tells us he and Bo most recently played in Utrecht, Netherlands, and here’s a video from that show (looks like Bo is wearing the same things he wore on stage at the Fitz):

Brown sings a song by Merle Haggard, whom he calls “a bad dude.” He sings one by his wife, Iris DeMent, based on a sermon about the Good Samaritan by the Rev. Sam Mann, a civil rights activist and the white pastor of St. Mark’s, a black Pentacostal church in Kansas City. (Brown and DeMent attended St. Mark’s when they lived in KC. Brown said DeMent took him there when they were getting to know each other. It was a test, he said, and he passed.) The song is called “He Reached Down” and it’s beautiful, whether sung by Brown’s deep-river voice or DeMent’s high-country one. I’d forgotten Brown and DeMent are a couple, and I think of June and Johnny Cash.

Brown sends out his final song to Bob Feldman, the founder and president of Red House who died in 2006 at age 56. At a time when record labels are fading, Red House is still in business, releasing new CDs and signing new and younger artists. Brown sings, “Tell me where the hope lies to bear this world.”
Posted by Pamela Espeland at 11:56 AM