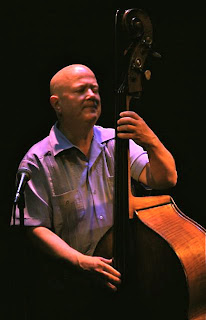 Gordy Johnson is one of the reasons jazz is so strong in the Twin Cities. His appearance on any stage is a guarantee of a fine performance. Maybe it's because bass players often stand in one place all night long and play large instruments that they seem rock-like and stalwart. With his broad forehead, shaved dome, and commanding presence, Gordy is kind of a Mount Rushmore of bass players. His tone is beautiful and his playing always engaging. I often find myself watching Gordy when the star of the evening is a singer, a pianist, or a horn player—not because he calls attention to himself but because I like him so much.

He has just released the fourth CD in his "Trios" series. How the series came about and what might happen next are reported in my MinnPost column for Friday, May 16.

Because we were at the Dave Brubeck Quartet concert at Orchestra Hall, we missed the first two sets of Gordy's CD release at the Dakota (with pianists Laura Caviani and Bryan Nichols) but were able to catch the third with Tanner Taylor. First up, the fireworks of "Bouncing with Bud," followed by the lilting elegance of Tanner's composition "Evanesque." Gordy is wearing a Mexican shirt given to him by pianist Chris Lomheim; he looks relaxed and happy. It's an open curtain show and the house is nearly full. Many musicians are in the crowd: Mary Louise Knutson and Michael Nelson, Lucia Newell, Connie Evingson. 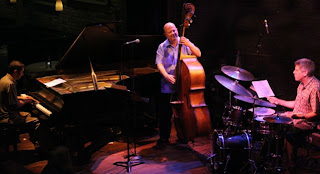 Next: "Wrap Your Troubles in Dreams," a track from Gordy's first "Trios" CD, where it was played by the late Bobby Peterson. Gordy mentions that Tanner sounds a bit like Bobby—"a powerful player." Then a Dizzy Gillespie tune, "Con Alma," a deliciously languid "Li'l Darlin'," and "Close Your Eyes." Finally "Blues for C.J.," a song Gordy wrote for his father, the late Clifford Johnson, a bass player for many years for the Minnesota Orchestra. It's the first song on the new CD and the last of the night. He and Phil Hey have been playing since 7 and it's time to go home.

Photos by John Whiting.
Posted by Pamela Espeland at 2:00 PM