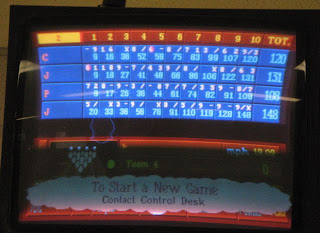 My son took me bowling for Mother's Day. It was tons more fun than brunch at a restaurant and I highly recommend it. We met at Memory Lanes, ate egg sandwiches, drank beer and Bloody Marys, and I still managed to break 100 (on the second game). Not so bad considering the last time I bowled was before electronic scoring. Also on the second game, HH turned into a bowling fiend, sending balls silently streaking down the lane at nearly 20 mph and smashing out strikes and spares. 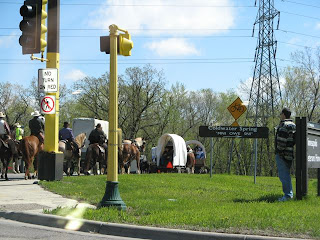 We were late getting there because we ended up behind a wagon train that was making its way up Highway 55. At first the traffic slowed. Then we noticed a street cleaning machine that was sweeping up what looked suspiciously like horse poop. Then we passed the machine and noticed the actual horse poop by the side of the road, and hoofprints. Then the traffic came to a standstill and we saw a big WAGON TRAIN AHEAD sign.

I learned later that it was part of Minnesota's sesquicentennial celebration and Native American protesters had blocked it on Saturday as it headed toward Fort Snelling.

It was an utterly implausible excuse for tardiness. Luckily HH had his camera.
Posted by Pamela Espeland at 5:09 PM