The second installment in Kevin Barnes's jazz film series is a kick in the head and a reminder that New Orleans is our national shame.

Documentary filmmaker Robert Mugge begins with aerial scenes of Katrina's destruction, then brings us back down to earth and into some of the devastated buildings including Eddie Bo's coffee house and Irma Thomas's club. 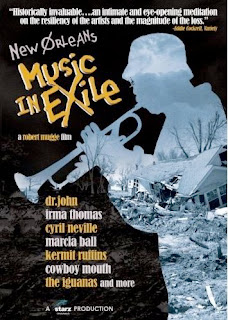 Interviews with Dr. John, Cyril Neville, the Iguanas, ReBirth Brass Band, Cowboy Mouth, Jon Cleary, Stephen Assaf, Mark Samuels (owner of Basin Street Records) and others reveal how the hurricane has affected the New Orleans music community. Some artists evacuated to Austin, Houston, Memphis, and Lafayette and remain there (in Texas, there's now a band called the Texiles). Others are trying to stay in NOLA. Some lost everything they had. Without exception, it's no longer an adventure, only an ordeal.

I've been curious about Basin Street because I have seen and heard several of the label's artists: Los Hombres Calientes, Irvin Mayfield, Henry Butler, Dr. Michael White, Kermit Ruffins. According to Newark's public jazz radio station WBGO (coincidentally another Jazz 88), "Before Katrina, the company had offices on upper Canal Sreet and a small full-time staff. There was the synergy of all nine artists living in one legendary city, creating and selling local music with national promotion. After Katrina, only the website was standing..... Both the offices on upper Canal Street and Mark [Samuels'] home in Lakeview were destroyed."

Samuels relocated for a while to Texas but has returned to NOLA, where he lives in the second story of his home and runs the company out of the gutted ground floor. He writes a blog that's mostly about his artists with occasional flashes of fury at the ongoing situation in his hometown.

The evening at BLB was supposed to begin with a performance by the North High Jazz Ensemble, a student group that rarely gets the chance to play out. But someone decided that students can't perform at the Bryant Lake Bowl because alcohol is served, so North High faculty members Tom Cross (keyboards), Ed Gitner (trumpet), and Jesse Buckner (drums) graciously stepped up to provide the live music opener. 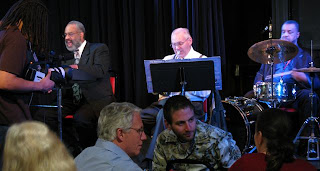 New Orleans Music in Exile is available for rental. Not sure if you'll find it at Blockbuster but it's on Netflix. Also on Amazon if you want to own it. Watch the opening on the Web site; see a clip of the Iguanas here:

Up next in the film series: Imagine the Sound, a film by Ron Mann (made when he was 22) that profiles four musicians vital to the evolution of free jazz: Cecil Taylor, Archie Shepp, Bill Dixon, and Paul Bley. Thursday, June 12, Bryant Lake Bowl, doors open at 6, live music at 6:30, film at 7, ten bucks. To reserve tickets, send Kevin an email: KevinB@Jazz88fm.com.
Posted by Pamela Espeland at 4:00 PM