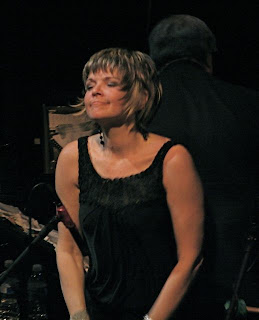 I've seen Karrin Allyson several times—at the old Dakota, the new Dakota, and a Leigh Kamman tribute. This is my favorite time. She's relaxed, at ease, warm, and happy, her band is terrific, and every song is enjoyable.

Allyson's voice is instantly recognizable. Once you've heard her sing, you know that sound: the way she shapes a word before releasing it, her unique scatting style and syllables (oo-way, fuh-fay-ohhhh), slight huskiness, soft vibrato, broad vowels, long ees and esses. (Romance becomes romanssssssssss.) It's kind of a rumpled-bedclothes kind of voice. High-end Frettes. 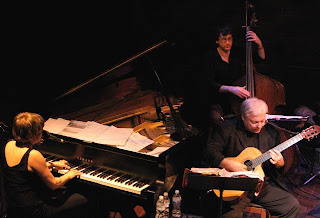 She usually brings an acoustic guitarist (Rod Fleeman) and sometimes two (where's Danny Embrey these days?) but tonight is a surprise: Steve Nelson is on vibes. I like him a lot, having heard him play with Dave Holland and his own group. But backing a singer? This is a first and it's fresh and good. 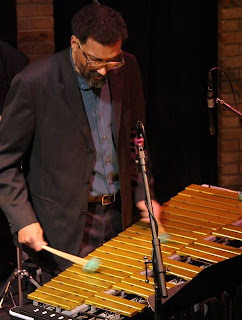 Tonight we hear Artie Shaw's "Moon Ray" ("Nancy King turned me on to this song") and several selections from Allyson's new CD on Concord, Imagina: Songs of Brasil. All are in Portuguese, a language she likes to sing; her 1999 release, From Paris to Rio, includes songs in Portuguese.

Simply beautiful: Jobim's "O Morro Nao Tem Vez (Favela)," Rosa Passos's "Outono" (with English lyrics by Paul Williams: "Don't you love the way the shadows dance across the bedroom walls/There's a beauty in the morning that I never felt before/It's the warmth of you beside me..."), Jobim's "Double Rainbow" with new lyrics by Chris Caswell. She flutters her fingers while she sings and calls attention often to her band. 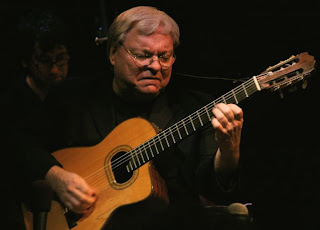 The mood shifts for "Long as You're Living," a song by Oscar Brown Jr. from her 2002 CD Blue, with a lot of lyrics and challenging intervals; it takes precision and there's no Jobim softness to it.

Tonight's audience includes members of Alicia Keys' band in town the night before her show at the Target Center. Allyson invites two of them to sit in. For "(I Don't Stand) A Ghost of a Chance with you," Freddie Hendricks adds soaring flugelhorn; David Watson plays flute on a song whose name I've forgotten. On the way up, Watson teases Allyson for asking Hendricks to play first; on the way down, he says, "She's too good for me, I'm sorry!" 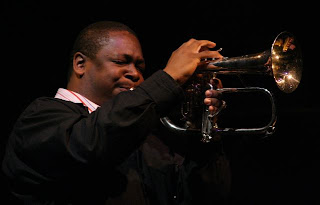 The second-to-last song is a bluesy, sassy, girl-in-control tune with provocative lyrics: "Don't want to burst your bubble but I don't even want to know your name.... You're right here, right now, and I like that." (Afterward, Allyson comments, "A little departure there for you.") Her final song is for her mom, something sweet in Portuguese.