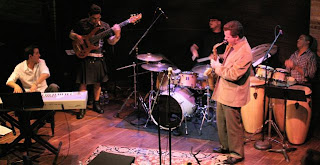 Sometimes you can't see everything no matter how hard you try. The mega big deal about this night at the Dakota was the first half of the evening, when Sir James Galway joined the Grammy-nominated Cuban band Tiempo Libre on stage.

The man with the golden flute was in town for performances with the Minnesota Orchestra; Tiempo Libre were here to warm up for Galway's next CD, which they will record with him in Toronto. Called O'Reilly Street for a famous street in Havana, it will be released on Sony BMG in September. 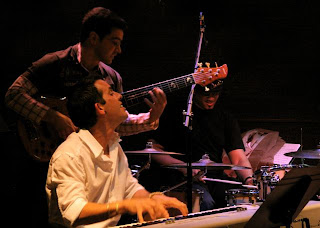 I'm curious how Tiempo Libre (billed as "one of the hottest young Latin bands") and classical virtuoso Galway got together in the first place. If anyone knows, please leave a comment.

Anyway, I spent the first half of the evening at MacPhail, where I've been taking another class (a jazz book club) from Kelly Rossum. By the time we arrived at the Dakota, which was open curtain and packed, Galway was gone. Everyone we spoke with raved about his performance. I have no doubt this was a once-in-a-lifetime thing and I wish I had been there, but that would have meant missing Kelly's class and his very interesting thoughts on Wynton Marsalis. 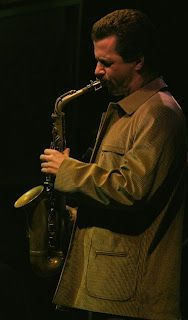 The second half of the evening featured Tiempo Libre with local Latin music hero Doug Little. We heard "Night in Tunisia," a Chucho Valdes tune, and something by Miles Davis. It was good. I was happy. Writing for the Strib, Jon Bream wondered aloud if the Galway CD release party would be at the Dakota. If it is, I'll be there...or try.

Photos by John Whiting.
Posted by Pamela Espeland at 8:55 PM