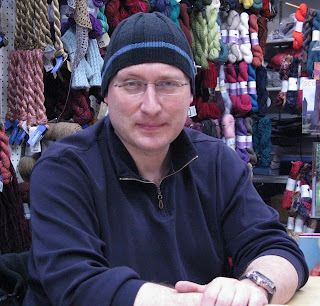 Michael Ekhaus is not a working jazz musician but that's only because he hasn't yet decided to become one. He is studying at least two instruments (conga and accordion), he blows glass, he makes shoes, he knits, he does math and God knows what else. He helped me make the pompom for Dave King's hat. He suggested adding a thin stripe to my hat design, so I did. Michael is an honorary cat.
Posted by Pamela Espeland at 4:58 PM

Email ThisBlogThis!Share to TwitterShare to FacebookShare to Pinterest
Labels: hats, Hats for Cats