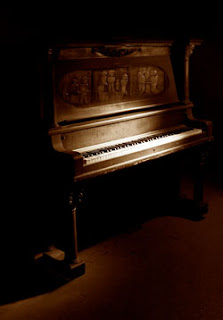 August Wilson "considered Penumbra the place to hang up his hat," his widow Constanza Romero Wilson told the Pi Press last week. She was in town to see Penumbra's most recent production of The Piano Lesson, one of two Pulitzer Prize winners that Wilson wrote while living in St. Paul.

Penumbra has had a long and close relationship with Wilson's plays, a cycle that traces black American life decade by decade from 1900 to 2000. Over the next five years, the theatre will produce all ten. The Piano Lesson is first, to be followed by Gem of the Ocean, which will be hosted by the Guthrie Theater.

When Penumbra stages an August Wilson play, we go. To date, we've seen everything but Gem of the Ocean, most at Penumbra. (We saw Radio Golf last June at Broadway's Cort Theatre, thanks to an email from Penumbra announcing a half-price ticket offer. The email arrived the same day we checked into our hotel, which happened to be about three blocks from the Cort. It was as if God had leaned down to say SEE THE PLAY.)

I hadn't seen The Piano Lesson before tonight. It's a long play—three hours—with a lot going on: history, ghosts, drama, comedy, fear, resentment, family tension, hopes, dreams, disappointment. Here's the summary Penumbra provides on its Web site (but, oddly, not in the printed program):

The piano that sits in the salon of the Charles home is very valuable. For Berniece, it holds the spirit of her grandparents, sold away in exchange for it during slavery. For her brother, Boy Willie, it holds the key to his freedom from the burden of sharecropping for a meager wage. The struggle between the siblings over the symbolic and literal value of the piano escalates into a conflict that threatens to tear the family apart. A Pulitzer Prize-winning drama, The Piano Lesson is the story of a family haunted by the living legacy of American slavery.

Penumbra's set is utterly convincing and complete with a working kitchen; stove burners light and water comes out of the faucet. Greta Oglesby and James Craven are strong as Berniece and her uncle, Doaker Charles. (Oglesby can sing. More, please.)

Recent Howard University graduate Ashford Thomas is amazing as Lymon in his Penumbra debut. And Dennis Spears inhabits the role of Wining Boy. Most people in these parts know Spears as a jazz singer. He's also a wonderful actor.

T. Mychael Rambo was cast as preacher Avery Brown; the night we saw the play, Terry Bellamy stepped into the role and did just fine.

As key character Boy Willie, Anska Akyea dominated most of the scenes he was in. Strib writer Rohan Preston described him as "incendiary and tempestuous.... Loud, rude, he is a metaphor for a restless, impatient future." He pounded, bounded, and slammed his way through the play.

Near the end, when Boy Willie speaks several lengthy passages, Akyea's delivery was so loud and rapid-fire that I lost much of what he was saying. I wish he had slowed down and ramped down a bit.

Other than that, the play was perfect. And I loved the woman sitting by herself right in front of us who told us during intermission that Spears goes to her church, then punctuated Act II with over-the-shoulder comments and asides.

A box set of all 10 August Wilson plays is available from Theatre Communications Group.
Posted by Pamela Espeland at 8:47 AM