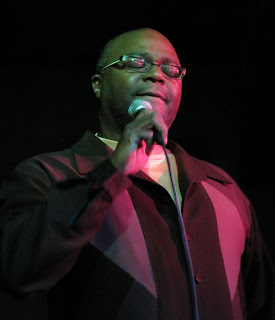 After Blues in the Night, we walk a few blocks to the Hamm Building to hear Bruce Henry in his first-ever appearance with the AQ's Tuesday Night Band. Henry is a singer I never tire of hearing. He's moving to Chicago soon and breaking my heart. I'll just have to hear him as often as I can before then.

He starts his set with Horace Silver's "Song for My Father," a tune I didn't know had lyrics until now. Then something Henry describes as "a little bebop skebop," followed by a passionate "House of the Rising Sun." Debbie Duncan comes in from the Ordway and Henry joins her at the bar; she calls him "my brother." Meanwhile (apparently Tuesday night is a rapidly changing scene here) Reuben Ristrom gets called up out of the audience to join the band for "Bye Bye Blackbird" and (unless I misremember) "So What." 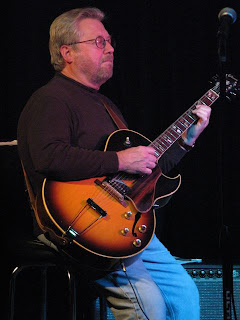 I haven't seen Ristrom play in years. He's the first guitarist I actually paid attention to, during a long-ago KBEM Winter Jazz Fest event. Until then, jazz to me had been all about piano and brass.

Taking pictures, I quickly learn that Ristrom plays with his eyes closed. He never, ever opens his eyes.

Henry returns for a soulful "What's Going On" (the second time in a week I've heard this performed live; J.D. Steele opened with it on Sunday), followed by "Summertime" and "Nature Boy." He's pulling out all the stops tonight, swinging and scatting and making trumpet sounds with his voice. The band can't stop smiling.

A break for Henry and up comes someone AQ doorman Davis Wilson only knows as "Chaco." He recently had a heart attack and now has a pacemaker. Dressed in gray leather, he sings "When I Fall in Love." 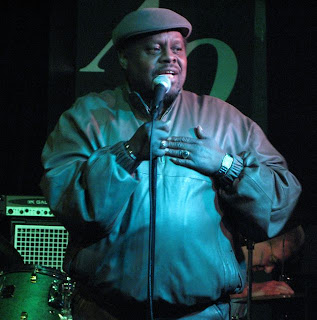 Posted by Pamela Espeland at 5:16 PM