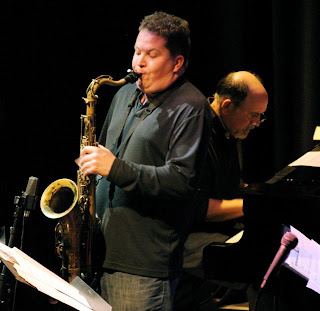 As much as I love late-night jazz, and as much as I love the Dakota, I don't go to Late Night at the Dakota shows as much as I would like. I've learned from experience that they draw noisy crowds. And while I know jazz will never command the pin-drop silence of a concert at Orchestra Hall or the Ordway, I'm still surprised when, for example, people seated at a table immediately beside the stage shout at one another to be heard above the music.

When the crowd is louder than the musicians, I'm not having a good time.

But I tried at this particular Late Night because the musicians were so stellar: a core Kelly Rossum group with guests from Texas, LoCascio and Witt. I've heard Witt before, but not LoCascio. They began with "Warm Butter," a Rossum tune, then played LoCascio's "A Widow's Tale" before performing three pieces from Witt's new CD, Live at Cezanne's: "Afterthought," "Renewal," and Wayne Shorter's "Footprints."

I had heard raves about the recorded "Footprints" from my friend and fellow jazz blogger Andrea Canter, who wrote for Jazz Police:

"Footprints" is the CD's centerpiece on multiple levels, a 16-minute mini-suite of its own that evolved with no prior arrangement, simply spontaneous combustion.... Everything shines on this track, and "Footprints" has never sounded as fresh and exciting since Miles Davis.

The "Footprints" we heard was another spontaneous combustion—entirely invented before our eyes and ears. Linz led into it on bass, LoCascio plucked the piano strings as if the Dakota's Yamaha were a harp, and Bates laid down a rhythm. It looked for a moment as if Rossum and Witt would start to play—both raised their horns—but then the rhythm section took off at such a pace that Rossum and Witt actually left the stage temporarily, making room for LoCascio, Linz, and Bates to explode, which they did. Then Rossum and Witt returned and the quintet gave us a "Footprints" I had never heard before—nor had anyone else. Brand new, created on the spot, utterly unlike (said Andrea) the version on the recording. 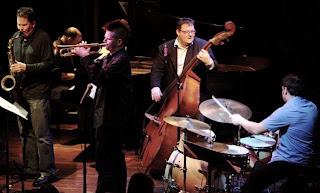 See and hear Witt play a tune from his new CD, Live at Cezanne's. Beautiful saxophone.
Posted by Pamela Espeland at 11:11 AM