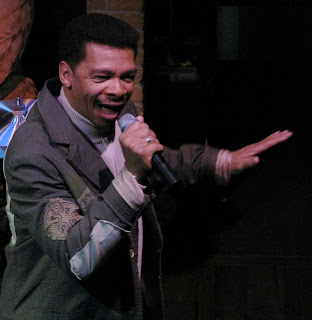 The band warms up and suddenly J.D. rockets through the curtain and launches into Marvin Gaye's "What's Going On" before a crowd of family, friends, and admirers. He's dancing and smiling and we're right there with him. No need to warm us up. From the moment he opens his mouth until his final goodbye, this will be a high-energy show.

I've seen the Steeles several times but never J.D. on his own. I wasn't expecting to be handed so much joy. J.D. is effervescent. This night is a CD release for an album he's been recording for the past decade ("Whenever I started working on the record I'd end up doing something for my family instead"), a celebration of 25 years in the music business ("I left the corporate world in 1983"), an introduction to the new love of his life (Shangilia, a choir of former street children from Kenya), and a family reunion ("My brothers and sisters will join me later and I hope you don't mind?"). The band is splendid. If you weren't in the audience, you can be sorry now.

We hear several songs from the CD, all originals: "I Wonder," "Don't Give Up" ("I wrote this song when a friend of mine was having some problems; I just wanted him to be encouraged"). We see a short film about J.D. and Shangilia, learn to say "Every burden shall be rolled away" in Swahili, and hear J.D. sing "Save the Children," another song I associate with Marvin Gaye though it's been recorded by a lot of people. 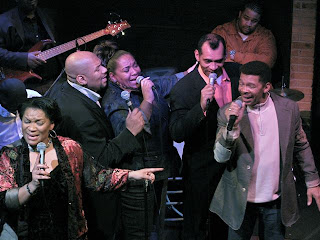 Jevetta, Billy, Jearlyn, and Fred join their brother for the final songs: J.D.'s "Starting All Over," "All Because of You," a rousing gospel tune ("I never shall forget what he's done for me..."), and "Better Love." Now the energy is incandescent. Have we just heard more than two hours of soulful, beautiful music? The time has telescoped. The evening could not have been better.
Posted by Pamela Espeland at 10:45 AM