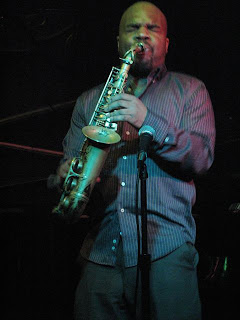 After a blistering performance on Thursday 3/6 with the Roy Haynes Quartet, saxophonist Jaleel Shaw moved to the Artists’ Quarter for the weekend. I previewed his Twin Cities shows for MinnPost last week and had the chance to interview him by phone when he was still in NYC.

When he told me one of his goals for his own playing was to stay rooted, like Roy Haynes has, I asked him, “Who are your roots?”

Shaw has been to the AQ before, both with Haynes and on his own. He has played with Kenny Horst but never with Lomheim or Peterson (whom he introduces as “Bill” on both evenings). The music is as fine as what Shaw has taught us to expect in his previous appearances: fresh, imaginative straight-ahead standards and original compositions, played with confidence and a clear, strong tone. Tunes include “I Remember April,” “Bemsha Swing,” “I Can’t Get Started,” “Darn This Dream,” Cannonball Adderley’s “Nardis,” Joe Henderson’s “Inner Urge,” and selections from Shaw's new CD, Optimism.

Shaw brings out the best in the other members of the quartet. Everyone seems to be enjoying himself, and Billy Peterson draws my attention again and again; each bass solo tells its own story. As does each of the shirts he wears, but that’s another topic.

Davis Wilson, beloved AQ doorman, introduces the second night by inviting us all to share in “the precarious beauty of producing beauty on demand, which is what jazz is!” 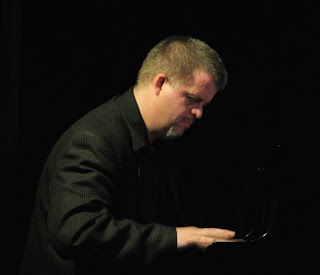 Photos by John Whiting.
Posted by Pamela Espeland at 11:10 AM