Irvin Mayfield and the New Orleans Jazz Orchestra: Do You Know What It Means Tour 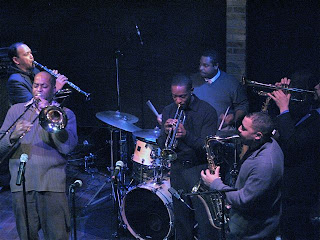 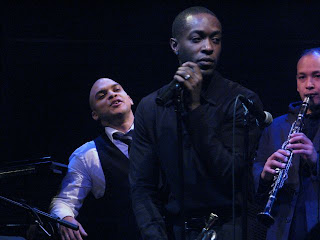 Irvin Mayfield is a man on a mission: making sure we don’t forget about New Orleans. His concert at Orchestra Hall with his New Orleans Jazz Orchestra begins with a short film about the birth of jazz in NOLA and ends with another about Hurricane Katrina and its devastating effects. In between, the music is wonderful.

The first tune begins as a call-and-response; for a few measures, the whole band just breathes. They quote “Wade in the Water.” Mayfield plays the tambourine; Victor Atkins solos (it’s good to see Atkins again, and the deliciously named drummer Adonis Rose); Aaron Fletcher solos on his alto saxophone. All chant “Hold That Water,” a plea to the levee it did not hear.

Mayfield tells us how glad he is to be back in Minneapolis, “one of the best places in the world for jazz, with the exception of the weather.” He hasn’t been here since November 2004, the last time his former group Los Hombres Calientes (The Hot Guys) came to town.

The next tune is based on a phone conversation Mayfield heard with a 911 operator: “People in the city/Better get to higher ground.” It features a solo by bassist David Pulphus, and it’s great to hear a bass all by itself in this 2,500-seat hall. Vince Gardner takes a trombone solo. Everybody sings. Rose’s drums seem overmiked.

“Beat” is NOJO’s love letter to Cuba. “New Orleans and Cuba have a special connection,” Mayfield explains. “We consider ourselves our own third-world country, the tip of the Caribbean.” Atkins plays a Latin beat and all the horns either solo or duet; this tune brings forth some serious blowing. In terms of hotness and guyness, NOJO is doing fine.

Mayfield plays more to the audience than Marsalis does, and he wants more from us: our attention, our emotions, and our understanding that New Orleans is our national shame.

He dedicates the next song, “The Prayer,” to “the start of all great music in America: the church.” Atkins gives it that gospel feeling. Ed “Sweetheart” Peterson plays his tenor saxophone, Evan “The Ambassador” Christopher his clarinet. This far north, we don’t hear much clarinet. Mayfield reminds us that New Orleans takes it very seriously. For a tune I think is called “It’s a Creole Thing,” Christopher plays a big, sexy solo that closes by rising up and up.

For “All of Me,” Mayfield features Minneapolis native Leon “Chocolate” Brown, who sings and also plays trumpet in the band. Mayfield takes a moment to tell us about his own instrument, the spectacular Elysian Trumpet. Created in memory of Mayfield’s father, who died in Katrina, the hand-built, elaborately decorated horn is set with precious stones and finished with 24K gold.

The final tune, “May His Soul Rest in Peace,” is dedicated to all of the victims of the storm. The band plays while the screen behind them shows indelible images. Mayfield quotes “When the Saints Go Marching In” to close.

But it’s not quite over. One more tune, more upbeat—something by Ellington?—ends the evening. A young woman comes out of the wings and starts to play her saxophone. It’s Amber Woodhouse, a former member of the Dakota Combo, now a student at Berklee. I learn later that her family knows the Mayfields, and when Irvin found out Amber was in town, he invited her to join them on stage. It’s a thrill for everyone.

Mayfield has announced from the stage that he’ll head to the Dakota after the show to play the late night set. It’s worth the nearly two-hour wait to see them again. For part of the time, we’re treated to the sounds of fiery Cuban pianist Nachito Herrera and his group. When they pack up, their drummer, Kevin Washington, stays on—a good thing, because Adonis Rose skips the Dakota and NOJO needs a drummer.

The rest of the night (into the morning) is magical: loose, easy, joyful music, with band members entering and exiting the stage, standing around, sharing jokes, laughing. When it finally must end, Mayfield sings “Shoo Fly,” leads a dancing second line through the club, and chants “Do what you wanna! Stand on the corner!”

Read Andrea Canter's profile of Amber Woodhouse on JazzInk. Scroll over Youth/Jazz Ed to the left, then down to Profiles of Young Artists.

Photos, top to bottom: Amber Woodhouse on stage with NOJO. Photo by John Whiting. NOJO at the Dakota with Kevin Washington on drums. Irvin Mayfield, Leon "Chocolate" Brown, and Evan Christopher.
Posted by Pamela Espeland at 8:56 AM