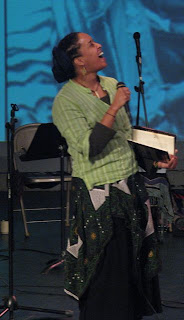 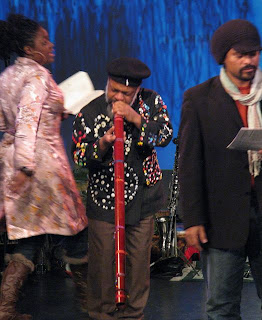 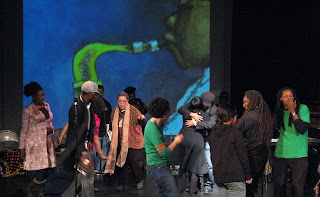 I learned about this event while searching the CIA’s Web site for information about Jim Ryan’s Forward Energy Band. I read the brief description —“A staged musical reading of Illinois Poet Sterling Plumpp’s ode to Charlie Parker, Fred Anderson, The Velvet Lounge (Chicago, IL) and Be-Bop!”—and thought, “That sounds intriguing.” Then I clicked on the link, read the cast list, and reserved tickets.

Wherever Douglas Ewart goes is worth checking out—ditto Carei Thomas, Kevin Washington, Bill Cottman, and Mankwe Ndosi. Plus I’ve been to the Velvet Lounge. (As Sean Parnell writes in his Chicago Bar Project, “It’s a pain in the ass to get to the Velvet Lounge but it’s worth the trip.”) The last time I was there, I saw Ewart play with a big band of AACM musicians. There may have been more people on the stage than in the audience, and the stage was about half the size of the club. The music was awesome.

Mankwe Ndosi is a Minneapolis-based performer who works in theater, dance, music, spoken word, and improvisation. I’ve seen her perform before and I like her a lot. She arranged this evening’s performance, and I’ll quote from her notes:

There are forty-seven poems in Velvet BeBop. I asked the word workers to select poems that connected to them—that held heat. We chose sixteen to work. We work the words to worry and shake, sing and riff out meaning. To squeeze and jostle out fragments of our histories—propelling us toward re-memory and metamorphosis…. This reading is a first exploration in putting these poems up on their feet live; with how we transform the conversation between poetry and music, each time is different.

The stage is a swirl of color and energy, language and music, singing and speaking. Bill Cottman sits at the edge of the stage with a laptop; I don’t realize until days later that he’s responsible for the powerful visuals on the screen at the back of the stage. Ewart, wearing a coat of many colorful buttons, has come with an arsenal of instruments and plays them all, including his slide didgeridoo. People dance and twirl and whisper and shout. I see artists who are new to me, including the singer Aimee Bryant, who opens her mouth and knocks me backward in my seat. At the end of her piece, a man sitting in front of me says, “Sheeeeeee*t. That was some stuff.”

The parking lot was full when we arrived; the small hall is packed and the audience is enthusiastic. For this eye-opening, ear-opening, mind-opening event with its large and multitalented cast, we each paid six dollars.

Note: Artists' names listed above are from the program.

Photos, top to bottom: Mankwe Ndosi. Douglas Ewart (center) in his fabulous coat. The joyous end to the evening.
Posted by Pamela Espeland at 8:59 AM