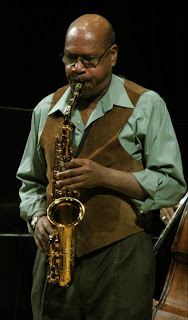 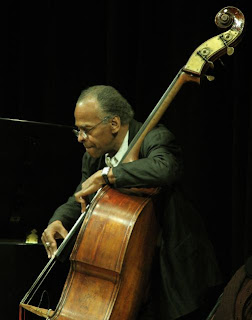 Jazz history came alive in Minneapolis near the river when Sonny Fortune closed the Winter Jazz Fest. Performing in MacPhail’s splendid Antonello Hall, the man who has played with Elvin Jones, McCoy Tyner, Miles Davis, and Dizzy Gillespie (he’s 78 but you wouldn’t know by looking at him) led his quartet in a program of mostly standards: a driving, exciting “Charade,” “Besame Mucho,” “Come Rain or Come Shine,” and two originals including “Awakening.” He alternated between alto sax and flute, an instrument that sounds wimpy when some people play it, robust and beefy when he does. He blows like he has all the air in the world.

The second set (the one we saw) was completely different from the first, as described the next morning by Dan Emerson in the Pioneer Press. Too bad more people didn’t stay over from the first set; there would have been no repetition (as if there ever is in jazz) and the audience would have numbered more than the 50 I saw. So it was a Sunday night, it was cold, it was dark, and Monday loomed, but Fortune deserved a larger audience.

We gave McBee a ride to the Dakota afterward. What a charming man. He told us he had recently married again, to a German woman whose family had traveled to the US for the big day. We talked about taking happiness when and where we find it and being glad for the chance. McBee was born in 1935, making him 73.

Photos by John Whiting: The man with the horn; Mr. McBee.
Bottom: The quartet.
Posted by Pamela Espeland at 9:01 AM