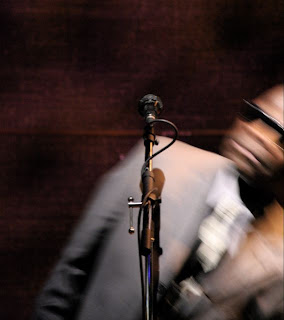 The small stage was a roiling, constantly changing crowd of usually nine and sometimes ten. Minneapolis’s own Stanley “Chance” Howard came up out of the audience to sing. Parker’s manager, Natasha Maddison, entered through the curtain at the back of the stage to recite Hamlet’s soliloquy “To Be or Not to Be” in her plummy British accent.

Parker explained, “In high school, I heard funky rhythms in my head. When I was told to memorize some Shakespeare, I chose ‘To be or not to be’ because I thought it meant ‘to be…or not to be…funky.’” Everyone laughed. 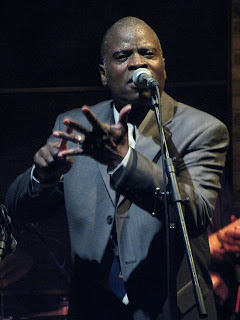 This was a line he had used before. (So was “When you hear this rumble, you feel your conscience grumble, hit me!”) Much of what he said and did seemed less than spontaneous, which isn’t that surprising since he’s almost always on tour. Just reading his schedule is exhausting.

Parker’s most recent CD is a double called Roots & Grooves. The first disc is a tribute to Ray Charles, and a lot of people probably showed up expecting to hear that. But it was only near the end that Parker donned a pair of shades and gave us a few bars of “Georgia.” The rest was funk: “To Be or Not to Be” (introduced by Maddison), “Pass the Peas,” “Funky Fiesta.”

Parker’s son Corey took a solo turn at the mike. So did Martha High, Brown’s former backup vocalist, bus driver, sometime hairdresser, and onetime stand-in when the Godfather of Soul was indisposed and the show had to go on. At least, that's the story Parker told. 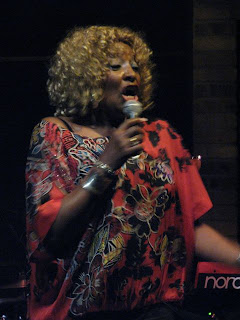 Some people enjoyed the show and some didn’t. The music was too loud and the crowd was too inebriated. But I’m glad I went; Parker is Parker and funk is funk. Worth noting: During all of his strutting, posturing, dancing, playing, and flirting with the audience ("We might be on stage but we're checkin' y'all out"), Parker never once grabbed his crotch, and yet, how sexy he was.

Photo of Parker as Brother Ray by John Whiting.
Posted by Pamela Espeland at 4:17 PM