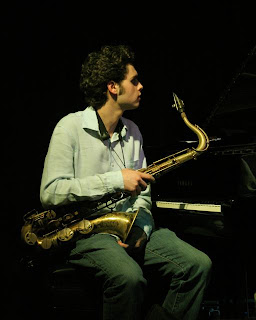 Flocks and Santiago are 18, Smith is 19, Cox is 20. All attend the Brubeck Institute in Stockton, California, as Brubeck Fellows; currently there are five Fellows and we're looking at four. Santiago and Smith attended South High School here.

Davis Wilson introduces the group to the crowd (which starts out sparse but fills up fast) by exclaiming "Welcome to the future!" 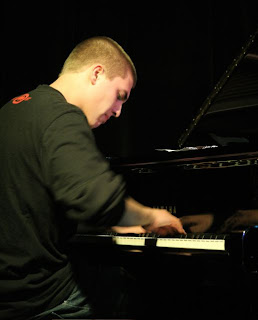 There's a Who rockumentary called The Kids Are Alright and that phrase goes through my head as I see and hear these teenagers (and one just barely out of his teens) play solid, straight-ahead standards and original compositions: Wayne Shorter's "Yes or No," "Body and Soul," Smith's "Left Behind," an untitled piece by Cox, Santiago's "The Grip," Billy Strayhorn's "Isfahan," Horace Silver's "Nutville," Shorter's "JuJu," Santiago's "Gravity." 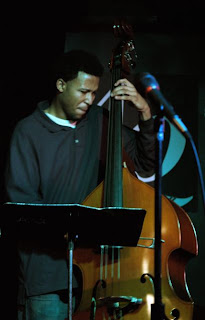 We stay for both sets. I forget they're kids. Next month they play Yoshi's. More than alright. 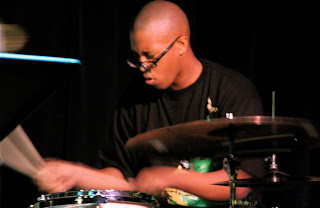 Photos by John Whiting.
Posted by Pamela Espeland at 8:39 AM