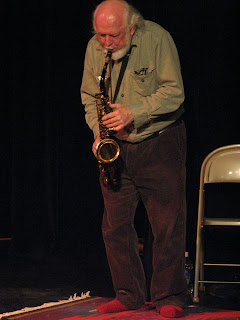 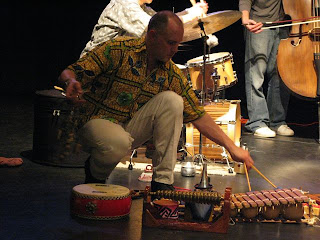 My first time at this venue, a nonprofit membership organization for artists from diverse physical, cultural, and aesthetic perspectives. A small audience, but it is free jazz, which doesn't draw crowds. Some people don’t like it and some won’t even try it. I like it a lot if I experience it live, less so on recordings, because part of the art (and part of the fun) is observing the interaction between the artists.

Behind a curtain before the show, Mangan does t’ai chi. She doesn’t like the spotlight and avoids it for most of the evening. J. Otis Powell! is in the house, one of the few, one of the proud; he sits right in front of me with his head full of dreads. That’s all right; if I want to take pictures, I can move.

Ryan titled this show “Sounds U Have Not Yet Heard,” and quite a few come out of his saxophones. The music ebbs and flows, stops and starts; sometimes they all stop, stand motionless, and you’re not sure if they’re done or not until someone plays a note or a series of notes and they’re off again. Then, like a school of fish or a flock of birds, they turn and head in a new direction. I find the whole thing fascinating.

They’re all fun to watch—Ryan in his red socks, Mangan forgetting the spotlight when she plays, Wanek serious on his bass (which, unfortunately, is undermiked for most of the evening), Hirsh rhythmic on his drums—but my favorite is Godston, who’s everywhere playing everything. His trumpet grunts and mumbles and blows hot air. He sits cross-legged on the ground and plays a Dave King array of what look like toy instruments. He disappears behind a curtain and plunks on an out-of-tune piano. He plays harmonica and mbira (African thumb piano). He whistles. Later, I learn he’s also a poet. A well-rounded, highly creative guy.

Every so often, Ryan lays down his horn or flute and approaches the mike to say a poem—about dying elves and enchanted boys, or a bad wizard (“The wizard rides on yellow wheels/The wizard lies, the wizard steals!”). Again, they pause. They’re perfectly still. We hold our collective breath. We wait.

Photos, top to bottom: Ryan. The whole group. Godston, up to no good.

View a video. Click it. I dare you. (Thanks to Andrea Canter for finding this.)

Posted by Pamela Espeland at 8:58 AM