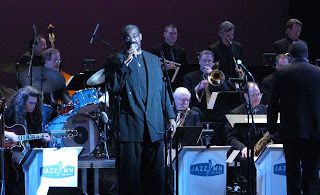 A very enjoyable show from start to finish. JazzMN played the first half: "Greetings and Salutations" (Thad Jones), "7th Heaven" (Steve Huffsteter; a tune Snapp heard in LA last year and enjoyed), Chick Corea's "La Fiesta," "Come Rain or Come Shine." Jimmy Hamilton (a local pianist Snapp thinks we should know but a lot of us don't because he performs mainly at the Lafayette Country Club, and who belongs to that?) took over for Mary Louise Knutson at the piano for three tunes including Ellington's "Don't Get Around Much Anymore."

Following intermission, Kevin Mahogany gave us several songs of his choosing. I learned only recently that when a big band features a guest vocalist, he or she provides the charts, and the arrangements depend on how skilled the band is. We heard "Satin Doll," "Everything I Have Is Yours," "In the Evening (When the Sun Goes Down)," "Yardbird Suite," and a song by Mahogany, "Three Little Words." I came to hear his smooth, rich baritone and his scatting; Mahogany is a terrific scat singer. Surprising many in the audience, Snapp scatted with him on one song. 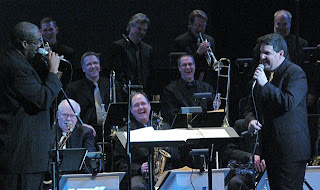 Mahogany was warm and generous and funny. He's a big man who's been dieting, and his custom-made suit was a few sizes too large for him. He told us after the show that he hasn't had time to have it taken in.

Near the end, Snapp announced JazzMn's next season, which will be its tenth (a considerable achievement for a big band these days):

My MinnPost preview of this show.
More from my interview with Kevin Mahogany.
Posted by Pamela Espeland at 10:35 AM