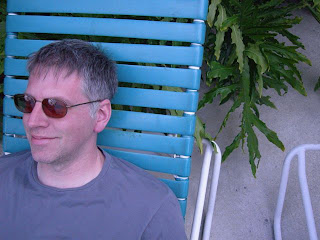 The Jazz is NOW! NOWnet, the composers' ensemble created by Jeremy Walker in 2004, is back and I'm glad. I wrote about its return and briefly about its history for MinnPost. Meanwhile, Marsha Walker sent me this picture of Jeremy relaxing in the sun during their recent trip to New Orleans.

Here's part of my conversation with Jeremy that didn't make it into MinnPost:

When I started in music, CDs had a lot of value. I had a conversation with my brother, Tom, a guitar player, and said, 'If you digitize this music, pretty soon recordings will have no value, and the real value, the only value, will be live performance.' That was probably 15 years ago. A few years later, I had a conversation with Wynton [Marsalis], who said 'If you can't sell your CD for seven or eight dollars, there will be a time when you can't sell it.' With Jazz is NOW!, we decided let's just record everything and people can have it. They can download it for a nominal fee, and if they want a pressed copy, we'll charge five dollars. Since it has no monetary value but it has artistic value, let's just share it.

During Ravi Coltrane's performance the other night at the Ted Mann, he mentioned he'd have CDs for sale in the lobby during intermission. "The music business is going down the toilet," he said, "so we'd better sell them when we can."

Where will the music business be in five years or ten? For an article related to this topic, see "The Music Man" (New York Times Magazine, 9/2/07) about producer and Columbia Records co-head Rick Rubin. You may need to log in to read it. It's lengthy but interesting.

Visit the Jazz is NOW! Web site and hear the NOWnet.
Posted by Pamela Espeland at 11:10 AM