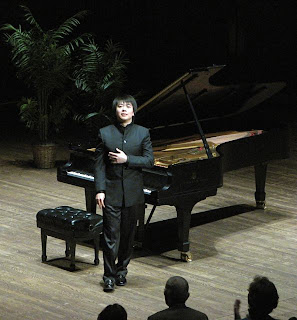 When: 3/13/08
Where: Ordway Center for the Performing Arts
Who: Lang Lang, piano

This was the second time in four years that young Chinese pianist Lang Lang appeared in the Schubert Club’s International Artist Series. We also saw him the first time, in October 2004. He was 22 years old.

That night, he played Mozart’s Piano Sonata No. 10, a Chopin piano sonata, some Schumann, Rachmaninoff, and Liszt, and three encores, including one accompanied by his father on the er-hu, a Chinese instrument. When he walked through the door leading offstage after his final encore, he leaped into the air.

Tonight he seemed more serious, less ebullient. Between then and now, he has performed before royalty and presidents, to crowds of tens of thousands, and to an audience of who knows how many millions during the most recent Grammys, where he and Herbie Hancock played Gershwin’s “Rhapsody in Blue.” He’s the global brand ambassador for Audi and Montblanc, and Steinway has named pianos after him. He’s huge.

He opened with a Mozart piano sonata, this time No. 13. Thoughtful and beautiful. His reading of Schumann’s C-major Fantasy lost me. His performance of Chinese works transcribed for piano—he described them as “an impressionist Chinese piece,” “Chinese Bach,” “a Chinese tango,” “a very traditional tune,” and “Happy Holidays”—was lovely and warm. His soft notes are so soft it’s as if moths are landing on the keys, yet managing to sound them.

During Granados’s “Los Requiebros,” I kept thinking about how poor Granados had died: crossing the Atlantic during WWI, his ship the SS Sussex was torpedoed by a German U-boat. He was safe in a lifeboat when he saw his wife in the water. He tried to save her and both were lost.

But no Chopin. And no leap following his single encore, a classical piece I recognized but can’t name.

I enjoyed the concert—Lang Lang is an amazing artist, an alien creature born with a great gift to parents who sacrificed everything to it—but I also wondered how things were going at the Jazz is NOW! NOWnet preview performance, which was happening concurrently across the river. I wished I could be in two places at once.

Photo by John Whiting.
Posted by Pamela Espeland at 8:48 AM