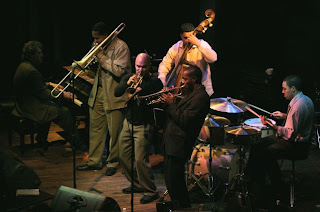 Whenever I read about a jazz artist or group spending a week at Birdland or the Blue Note or the Jazz Standard, it makes me crazy. A residency of several days is the ultimate opportunity to hear what live jazz is about: creating, evolving, in the moment.

As I write this, Lee Konitz is in the midst of a six-day stay at the Standard with his trio (Rufus Reid on bass, Matt Wilson on drums) and guest Danilo Perez on piano. I can’t imagine that group is playing the same tune the same way even once.

Here in Minneapolis/St. Paul, most artists from out of town stay a day or two, sometimes three. Irvin Mayfield was here at the end of February with his New Orleans Jazz Orchestra. He returned for three nights at the Dakota with his sextet, and we went to all three late sets.

Wednesday is an all-music night: “Mack the Knife,” “All of Me” (with Leon singing; he’s been practicing and it shows), “Mandinga” (a Cuban tune from the Los Hombres Calientes days), “St. James Infirmary” (Mayfield sings, and his style is interesting: the word “hat” becomes “hay-ay-at,” and “song” becomes “saw-waw-wong”). 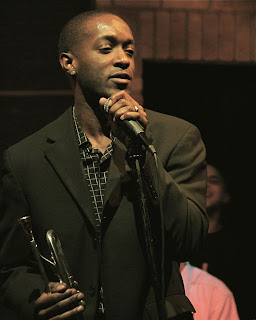 There’s a relaxed, loose playfulness to this band, with a lot of back-and-forth (verbal and musical) and laughter on stage. While one is singing, another eggs him on (“Where’d you go?” “What’d you say?” “What’d you do that for?”).

At one point Mayfield bumps Torkanowsky off his bench and takes over the comping. Later Brown picks up a water glass from a nearby table and uses it as a mute for his trumpet.

Toward the end of the set, Mayfield calls Christine Rosholt to the stage for a song. She announces “Squeeze Me” and nails it. She bosses the band around. She asks for and gets a duet with bassist Henriquez. She even gives us a bitty scat (be-de-be-da-be-doo) and Christine never scats. It’s a terrific performance. Go Christine! 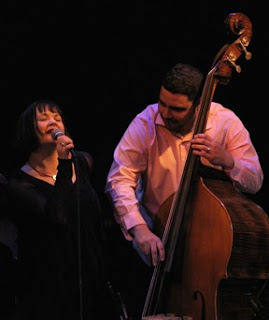 On Thursday, Mayfield makes many references to the New Orleans Public Library, for which he serves as chairman of the board. The mezzanine is full of librarians from NOLA, in town for the Public Library Association annual meeting and enjoying the Dakota on Mayfield’s dime.

Mayfield greets them and teachers from Kenwood School in Minneapolis, where he spent part of the day. He reads us a book he read to the children: The Jazz Fly by Matthew Gollub. His band plays along and the audience buzzes whenever Mayfield says “fly.” It’s charming and fun.

He also reads a poem by the late film director and photographer Gordon Parks, with whom he collaborated on the Half Past Autumn Suite. And a poem by Pablo Neruda, “Tonight I Can Write the Saddest Lines.” “Love is so short, forgetting is so long,” Mayfield reads, then adds “Lord have mercy!” It’s a jazz book club, with music: “You Go to My Head” (Vincent sings, the first time I've heard him do that), a “Mandinka” reprise, “All of Me” (Brown sings), a second-line finale complete with guerilla tap dancers who show up on stage and bring the house down.

After the show, several of us go to the King and I Thai restaurant for Mai Tais. Brown, Henriquez, and Gardner are now on my Hats for Cats list.

We’re back on Friday after seeing 7 Black Butterflies and Prezens Quartet at the Walker (more about that separately). It’s an open curtain night, very crowded. I go to say hi to friends seated on the dining room side and am introduced to Kathleen Battle, in town for a performance Sunday at Orchestra Hall. I’m star-struck and babbling.

Tonight is more similar to Thursday than to Wednesday, with readings of The Jazz Fly, Parks, and Neruda. Brown sings “When My Dream Boat Comes Home.” Another guest singer takes the stage, and this one is nearly a train wreck; the band can't find the key she's in, everyone stops playing, and for a few bars she's singing "Summertime" a cappella. The audience falls stone silent. No one breathes. But she hangs in and so does the band. Afterward, a gracious Mayfield explains that these things happen. 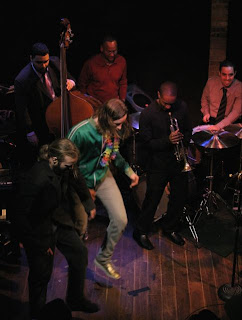 In retrospect, I’m not sure how much evolution I heard in Mayfield’s music, but it was a three-day party and I had a great time. I now have a signed Mayfield/Gordon Parks poster and Mayfield’s new CD with Ellis Marsalis, Love Songs, Ballads and Standards. I woke up on Friday with a Mai Tai headache. And I have to make three hats.