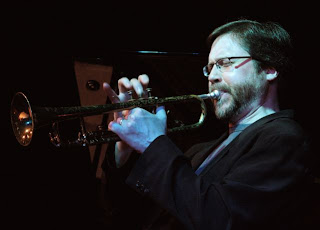 I've seen Pemberton play at least once before, with Chris Thomson at Rogue Buddha, but never as a leader. And I like the little I know about Lee Morgan's music. His CD The Sidewinder, recorded for Blue Note in 1963 with Billy Higgins on drums, is one of my faves.

Since this is a Morgan tribute, all of the music we hear tonight was either written by him or associated with him in some way. It's an evening of solid hard bop (soulful, bluesy, muscular jazz with fairly simple melodies; I've probably put my foot in it with such a minimalist definition, but there it is and comments are welcome). We hear "Something Cute," "Afreaka" (which Cedar Walton wrote for Morgan), and "The Double Up." Lewis is the Zen timekeeper, the Buddha of the bass, a picture of serenity yet completely in the groove.

Several of us request "Sidewinder" and get it in the second set. It's a tune that seems very similar to Herbie Hancock's "Watermelon Man," relaxed and easy. "Sidewinder" is a 10-minute track on the original CD and that has never been too long for me. I could put "Sidewinder" and "Watermelon Man" and Horace Silver's "Song for my Father" and Jimmy Smith's "The Sermon" on one CD and play it over and over again and be happy. All hard bop.

Throughout the night, Lomheim, Lewis and Horst look often at each other, as jazz musicians do. Pemberton communicates with his band but he also watches the crowd, makes eye contact, checks us out. Marentic seems both part of the group and off on a planet of his own. At one point, Pemberton nods and gestures to Lomheim, which looks a lot like "Your turn for a solo." Lomheim bends over the keys and Marentic takes off on his saxophone. No problem, Lomheim comps, but it's interesting to see. 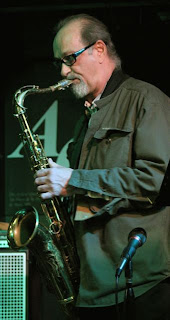 Photos by John Whiting.
Posted by Pamela Espeland at 8:00 AM