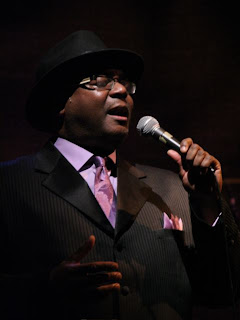 We're seeing Bruce Henry as often as we can before he moves to Chicago. Tonight he's in fine form, dressed to the nines, accompanied by an excellent band, singing his heart out, bantering with the open-curtain Friday-night crowd, and happy to be in this elegant club ("People talk about this place all over the world," he later says).

We don't hear "Nature Boy" or "Afro Blue," two of his signature songs, but we do hear others Henry has made his own: "House of the Rising Sun," Chick Corea's "Spain" (with lyrics by Al Jarreau), the original "Africa Cries."

As many times as I've heard Henry sing "House of the Rising Sun," it has never been the same. It depends on his band, his mood, the crowd, the weather, maybe the way the planets are aligned. Tonight it's new again—partly because Henry sings as if it is, partly because each note from Nichols's piano is a surprise. 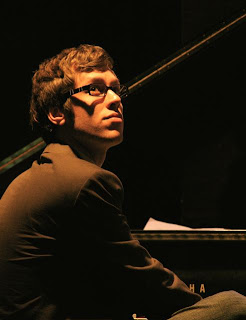 We hear "Autumn Leaves," Horace Silver's "Senor Blues," and "In the Beginning God" from Duke Ellington's Sacred Concert ("a seldom heard song unless you come to my shows," Henry says).

He tells us about growing up on Madison Street in Chicago, home of the blues; how all of the big blues singers had "imposters" (Little Little Milton, Little James Brown;) how he once saw the real Muddy Waters get out of his car and go into a club and tried to follow him in. "I'm not a blues singer, but I've got the blues aesthetic," Henry says, then launches into the blues standard "Sweet Home Chicago."

More Horace Silver, this time "All," a song Henry got from Dean Brewington, "the first person I met in the state of Minnesota." The lyrics (also by Silver) seem especially appropriate for Henry: "All time is now/all space is near/all minds relate/all souls evolve...all things are spirit/all is in mind." His performances are engaging and entertaining, but they're also deeply spiritual if you're willing to let that part reach out and touch you.

African American history is important to Henry. "Every day of my life, I celebrate African American History Month," he says. Then he sings an original song, "Jump That Broom," based on genealogical research he did on his own family, including a great-great grandfather who loved his about-to-be great-great grandmother so much that he bundled his clothes on top of his head and swam across a lake to court her. Boudreaux plays the washboard and it's joyous. 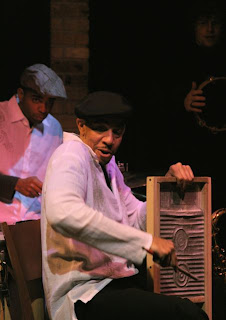 Henry closes out the night with a song for Martin Luther King Jr., who died on this day 40 years ago. Rather than a sad song, he gives us "a song about freedom and justice and peace all around the world." I don't know the name but here are some lyrics: "It's a party/it's a freedom party/raise your victory sign!" He ends by wishing us peace and love. There's no encore; we don't need one.

A few about the band: I hadn't heard Nichols and Bates play with Henry before but you can't go wrong with either one. Boudreaux has always seemed like Henry's own hands on the percussion, a natural fit; as Henry said earlier in the show, "We go way black, I mean back," then laughed. I've heard Wendell Henry play drums for Bruce Henry but never for anyone else. I'm guessing he'll show up at the Freedom Train benefit concert on April 19? (For more about that, see Andrea Canter's preview on Jazz Police.) 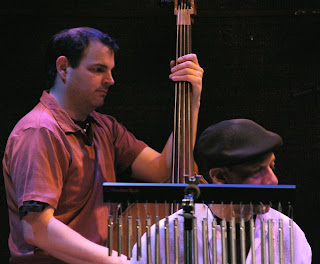 Vircks was new to me but I have since learned (thank you, Jazz Police and the Internets) that he's part of Moveable Feast, the Rhythm Junkies, and other bands around town. I thought he got off to a slow start but picked up the pace later in the show. Good, strong sound. 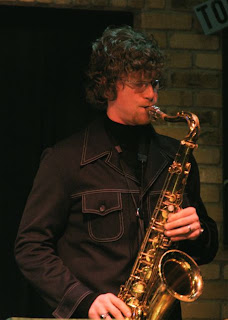 Photos by John Whiting.
Posted by Pamela Espeland at 1:29 PM