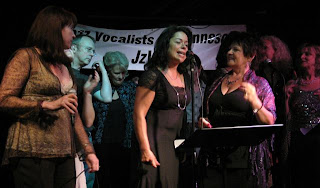 Laurie usually performs with Philipsek and Brueske; Schulte's violin was a perfect addition to the group and I hope he appears with them more often. Three of us (HH, Andrea Canter, and I) had a lovely dinner (crab-crusted halibut, scallops, steak) and shared a pot de creme.

This is a French bistro, with things on the menu I won't eat (frog legs and snails). But the food and the service have been consistently good in the years HH and I have been coming here, and now we get to hear Laurie and her band as well, really hear them, not battle the crowd noise (think Crave and Maude) to catch a single note.

Visit Laurie's MySpace site to hear her sing. Better yet, show up at Cave Vin some Wednesday night between 6:30 and 9:00.

Photo: Laurie (center) performing with the Jazz Vocalists of Minnesota at the Artists' Quarter in 2007. Next time I'll get a picture (or HH will) at Cave Vin.
Posted by Pamela Espeland at 12:00 PM