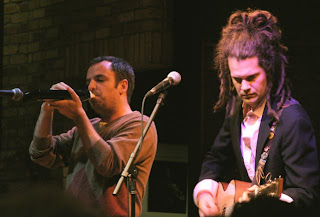 When: 4/6/08
Where: Dakota
Who: Peter Lawton and Craig Wright

The Tropicals were a Twin Cities acoustic folk duo in the 1990s. They have reunited to open for Nellie McKay. I totally missed them the first time around. Today Lawton teaches sixth grade at the City of Lakes Waldorf School in Minneapolis and fronts a group called Kangaroo. Wright is a Hollywood screenwriter (Six Feet Under, Dirty Sexy Money).

Wright comes out and immediately starts telling a story that goes something like this: "I went out with a girl named Andrea. We broke up in New York City. Soon after I walked across Central Park, came over a hill, and saw a Komodo dragon. A huge crowd had gathered around it.... That never happened but that's how I feel tonight, like an ancient dinosaur in a city full of people on their way to somewhere else."

I think, okay, this is going to be odd.

It is odd, and also charming. The Tropicals' songs are (at least on the surface) about young love and blue skies and butterflies. Lawton plays guitar, Craig occasionally plays a melodica, a free-reed wind instrument that looks like this. 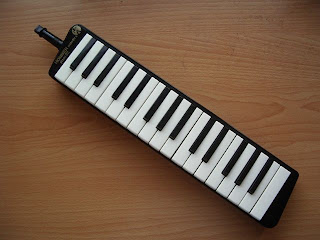 They're sort of a twisted, tongue-in-cheek Simon and Garfunkel. Wright (the talker of the pair) introduces one song as being about "politics and math and homework and the virtues of doing your homework." Sample lyrics: "You be the bee and I'll be the sting/You be the center of the earth so hot and I'll be the drillin' thing."

Their music is more complex than it first appears, with surprising shifts and chord changes and high harmonies. I like it.

I like Wright's patter, too. He promises early on he'll say something about Vachel Linsdsay. Introducing a song based on Lindsay's poem "The King of Yellow Butterflies," he says, "Like many people who write poetry for children, [Lindsay] drank a bottle of bleach and killed himself."

We hear "I Bicycle Miles" ("I sold my gun just to buy you yellow roses because you said they looked like fun") and "Numberless Wonders," "Lake Adelaide" (supposedly based on a novel by E.L. Doctorow), "Sara Orange Tip" (about a particular kind of butterfly), and "You've Drawn Me" ("where there was once just a plan now there's a man because you've drawn me").

Wright tells us that "the Tropicals are a terrible mix of things—the most foul things about male culture coupled with a terrible twee cuteness." They are also the perfect lead-in to McKay.

Photo of Wright and Lawton by John Whiting. Melodica from Wikipedia.
Posted by Pamela Espeland at 4:09 PM