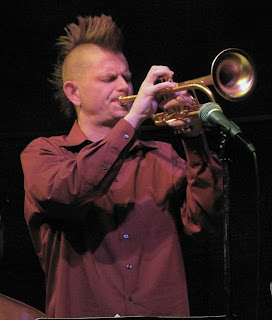 It’s already a long night: 7 Black Butterflies followed by Prezens at the Walker, then the final set of Irvin Mayfield’s sextet at the Dakota. It’s after midnight and we’re going home. Then Kelly Rossum and Chris Bates walk past the bar. They’re here to play so we stay. 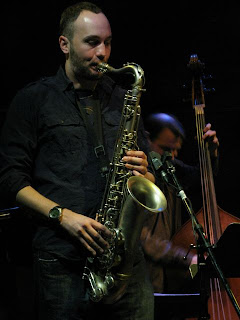 I haven’t seen Wozniak before; he plays around town with Atlantis Quartet and The 3Rio. I learn from his MySpace page that he spent six months working in a jazz club in Shanghai. I like his sound. Tasha Baron is new to me, too; our friends Ben&Amy tell us she’s with Black Blondie. MySpace says she’s also with Hips Don’t Lie and Sferic Witch. 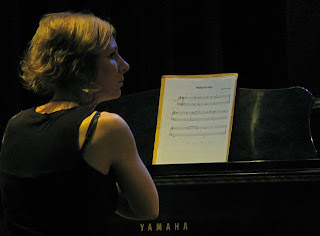 This is the first time these five have played together. Dan Eikmeier, who books the late-night shows, pulled them together and it works. They start with Kenny Garrett’s “Sing a Song of Song,” end with something called (I think) “Play It Twice.” It’s Late Night so there’s a lot of chitchat, even at our table, but I’m glad we stayed.
Posted by Pamela Espeland at 10:42 AM