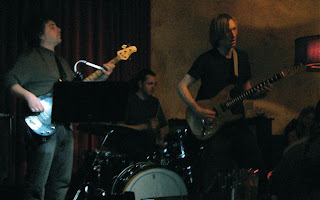 One of us says no to cake at the dessert reception following Bruce Henry's Freedom Train performance (hint: not HH) so it's off to Maude after. So far we've been there only on Friday nights for jazz. Saturday is their ambient night, whatever that means.

Tonight it means Park Evans and a mellow groove. We have grilled brussels sprouts (they're delicious) and what I seriously believe are the best hamburgers in town while enjoying really nice late-night music.

The trio plays a tune I know but can't figure out for the longest time. A beautiful melody, like a Gregorian chant, repeated and played with, drawn out, returned to. What is it? It's making me crazy. Then I start hearing words in my head. It's the Advent carol "O Come, O Come Emanuel."

If Evans wants to do a holiday CD, I'm for it.

I have to pay more attention to Maude's music schedule. While looking up the names of the people who played with Evans, I learn that Douglas Ewart was here last Saturday, with cellist Jacqueline Ferrier-Ultan (of Jelloslave) and percussionist Stephen Goldstein. That was the night we saw Peter Lang at the Dakota (and before then, Beyond Category), but still, it would have been tempting to try for three.

Photo by John Whiting. It's dark at Maude.

Posted by Pamela Espeland at 11:27 AM