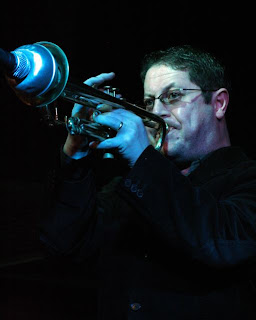 New York trumpeter Rotondi doesn't make it to St. Paul very often, and neither does Carrothers, so when the two perform together it's must-see jazz.

On the first tune, "It's You or No One," Carrothers is already playing as if he has spent the past several hours practicing scales and doing finger push-ups. He alternates between explosive runs and Zen-like calm.

On "What's New," Rotondi swaps trumpet for flugelhorn and Carrothers quotes "Honeysuckle Rose." I'm reminded of the need to pay close attention when Carrothers plays. As with all jazz (all music, for that matter), you can choose to sit back and let your mind wander while the music becomes background and still have a fine time, but you'll miss a lot, including the entire history of jazz and pop culture, which Carrothers brings to every performance and tosses in as if it's no big thing.

He is one of the least self-conscious performers I've ever seen. He sings out of tune while he plays in his stocking feet. He's a handsome guy but doesn't care if you can see him or not. Tonight he spends part of the first set behind a black metal music stand that blocks him from view by a large part of the crowd. Howard Gitelson, who wants to shoot pictures (as many of us do), takes advantage of a break between songs to ask if he can move the stand. Carrothers says sure. 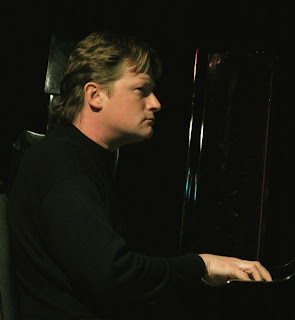 "Easy to Remember" starts out as "But Not for Me," Monk's "Evidence" includes some "April in Paris." Clifford Brown's "Gerkin for Perkin" (great song title) gives way to "They Can't Take That Away from Me." Rotondi sounds terrific and he's enjoying himself.

Carrothers takes a solo and it's Mr. Toad's Wild Ride through the James Bond theme, "The Meaning of the Blues," Civil War tunes, and who knows what else; by the time my brain searches my memory of tunes to identify a theme or passage I'm hearing, it's long gone and has been followed by five more. I imagine if I were sitting closer, behind his chair (Carrothers never uses a bench, always a chair), I would hear his synapses firing. 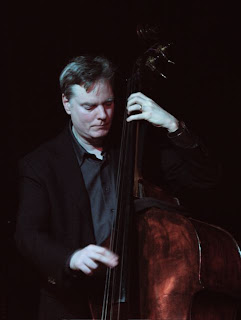 The night ends with a fresh take on a familiar standard, "Without a Song." Carrothers storms the keys and Rotondi's brass is high and clear. Horst takes his big solo, starting on the high hat and cymbals, moving to the bass and toms. I wonder (as I have many times) why the drum solo always comes at the end. Carrothers closes with the "Jeopardy" theme.

Get a taste of the evening with Don Berryman's video:

Photos by John Whiting. Top to bottom: Rotondi, Carrothers, and Lewis, who's usually (like most bassists) in the shadows. Nice shot, Johnny.
Posted by Pamela Espeland at 1:40 PM