The great bassist Ray Brown died on July 2, 2002, after playing a round of golf. He was due at the Dakota a few days later to headline a benefit for the Dakota Foundation for Jazz Education, then play a couple of nights in the club. We had made our reservations well in advance; we knew not to miss Brown when he came to the Twin Cities. His shows were always satisfying and he never played an encore.

Green, McBride, and Hutchinson do play encores, perhaps because they are in a festive mood. "We're here," Green explains, "to celebrate the beautiful music and trio arrangements of our friend, mentor and hero Ray Brown." All three knew and played with Brown. Green and Hutchinson were part of his working trio; McBride played with Brown and John Clayton in Brown's SuperBass trio.

The tribute runs for three nights. We're there for the last two, including the final set on the final night, always my favorite show.

On the first night we hear a tune Brown wrote for Art Blakey, "Buhaina Buhaina" (Abdullah Ibn Buhaina was Blakey's Islamic name), followed by "Billy Boy," a standard Brown played when he was part of Oscar Peterson's trio.

It's so good to hear Green play piano again. The last time he came to the Dakota, in August 2007, he performed with Belinda Underwood, a jazz bassist and vocalist. She even had top billing ("Belinda Underwood with Benny Green"). It was not a successful evening. Most people were there to hear Green, and not a lot enjoyed Underwood's singing. She didn't bring her bass and she should have and that's all I have to say.

(In his Jazz Beyond Jazz blog, Howard Mandel wrote, "I seldom write anything very toxic even about the most insufferable b.s. That's just the kind of critic I am, the kind kind.")

"In the Wee Small Hours of the Morning" begins with a sweet and achey solo by Green. McBride introduces the melody on his bass, and Hutchinson caresses his drums with his brushes. Beautiful. 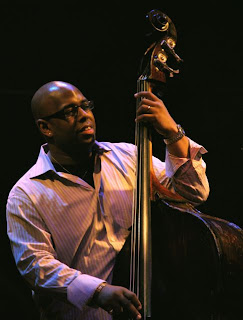 On both nights, they pass the mike and take turns talking about Brown, about each other, about what they've just played and what's up next. They're comfortable, easy, doing what they love for an appreciative audience. It's straight-ahead jazz heaven.

We hear "Bass Face" and the Monday show ends with "How Could You Do a Thing Like That to Me" and "Captain Bill," a tune written by Gene Harris for Count Basie.

The Tuesday night set list isn't that different—"Buhaina Buhaina," "Billy Boy," "How Could You Do a Thing Like That to Me," "Bass Face," "Captain Bill." Instead of "Wee Hours," they play "Polka Dots and Moonbeams," which begins with a bass solo. And we hear "The Summer Wind," a song Frank Sinatra made famous.

But while the set list is similar and the melodies are familiar, the music is not the same. Plus everyone seems a bit more gregarious tonight. McBride tells a favorite Ray Brown story about Brown's days in Hollywood, playing for movies and television. Toward the end of the evening, Hutchinson says they're here "in the spirit of Ray Brown and also in the spirit of Benny Green, Christian McBride, and Greg Hutchinson. We play his tunes and we make them our own." 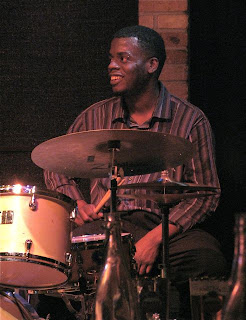 Afterward, Green and Hutchinson hang out at the bar. I mention to Hutchinson that I never heard Brown play an encore. He laughs. "Yeah, when Ray was done, he was done."

Photos of the trio and McBride by John Whiting.

Andrea Canter saw early sets and writes about them here.
Posted by Pamela Espeland at 6:33 PM