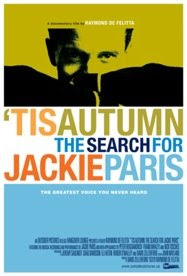 Kevin Barnes is starting a jazz film series to benefit KBEM, the Twin Cities' jazz and education radio station, and I previewed it for MinnPost. When I asked Barnes what inspired him to start the series, he said:

We helped sponsor the Minneapolis/St. Paul International Film festival and brought in a Miles Davis documentary maybe six years ago.... I thought it would be nice if we could find the right setting and the opportunity to do something with both independent jazz documentary pieces and independent films created with jazz as an important part of the musical landscape.... A key part of this launch was Ed Jones's show "Reel Jazz" on Monday nights, which looks at both jazz and film.

I had never heard Jackie Paris before now, and I certainly didn't know he was the first singer to record Monk's "'Round Midnight." You can hear sound clips on the film's Web site or download songs from iTunes. His most famous recording: "Skylark."
Posted by Pamela Espeland at 3:04 PM