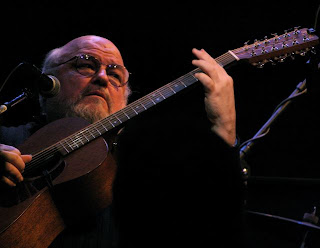 I decide to go to the Dakota show when I learn Dave King will be Lang's drummer. 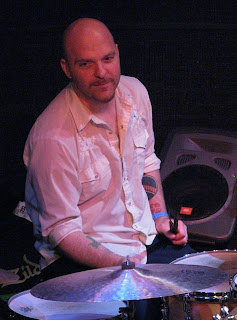 "If you came here to hear my tunes," Lang tells us, "you're out of luck. These are tunes that mentored me." His new CD, Testament, is old-time blues, what he calls "the DNA of American music."

One of his guitars is a deep, brilliant blue. It reminds me of Raphael Fraisse's violin. Fraisse was a gifted violinist who played with the Parisota Hot Club. He died of leukemia in 2006 at the criminally young age of 31, and we miss him.

Lang links his songs with stories; he likes to talk. His singing voice is gruff and growly, but his playing is ethereal. This is a CD release show, and we mostly hear songs from the new CD: "Freight Train," Leadbelly's "Keep Your Hands Off Her," "Brownsville Road," "Nobody's Business But My Own," the John Hurt tune "I'm Satisfied" ("I'm old enough to marry you/I'm satisfied/Tickled too...."), "Stackolee" (better known as "Staggerlee"), "Delia," "That''ll Never Happen No More," "Guitar Rag."

He prefaces many of the songs with information about where they came from, who wrote them, what they're about. It's a music history lesson as well as a performance. Not all musicians are comfortable talking to their audiences, or they may not be in the mood to talk, but I wish more would tell us a little about what they're playing. Some of us aren't there just to be entertained. We're there to learn. 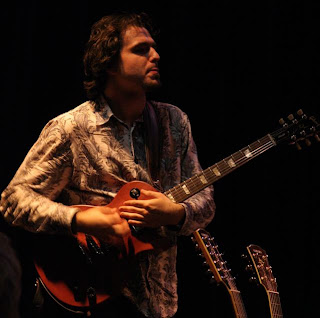 "The blues," Lang says at some point during the evening, "is nothing but a good man feeling bad."

Harmonica player Michael Tanner is the man who convinced Lang to make this new CD. "He lured me into the studio with a good bottle of California wine," Lang explains. Joe is Lang's son; when asked how it feels to play with him, Lang says, "I could die happy." Steve Larkin, who plays bass on the CD, is replaced here by Jonathan Thomas, who does just fine. James Hauck, whom Lang introduces as "one of my oldest friends...we are brothers of different mothers," joins the band for "Brownsville Road."

Turns out Dave King is a blues and roots drummer. I'm surprised for about two seconds; he can probably play anything. This is a different side than I've seen with the Bad Plus or Happy Apple or any of his numerous other bands. Renewed admiration.

Lang ends the set with an original and sounds like he's playing a 10,000 string guitar. 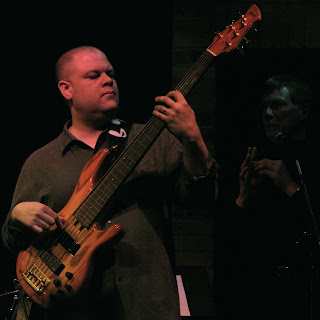