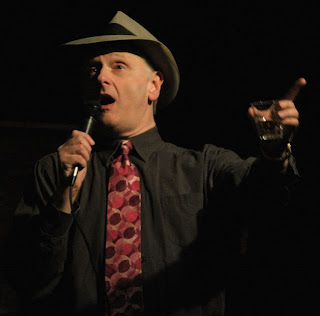 Singer Arne Fogel is the topic of this week's MinnPost jazz column. We go to see him at the Times on Wednesday night and meet practically his whole family, including his 91-year-old father and his daughter, Rebecca, who are all seated near the stage. Between verses of songs he is singing, while the band is doing its thing, Fogel often bounds off the stage and runs over to say something to his family. During "Ring-a-Ding-Ding," he brings his daughter up to sing with him.

We hear two wonderful sets and several classic songs: "Old Man River," "Here's to the Losers," "Do I," "The Tender Trap," "Take My Sugar to Tea," "Please Don't Talk About Me When I'm Gone." Fogel is as fun to watch as he is to hear. His performance is loaded with personality, energy, and grand gestures. Taylor, whom we most often hear backing singer Christine Rosholt or fronting his own trio, plays big stridy chords. Forberg wears a tank shirt printed with "Pink Is the New Black" in metallic ink.

Fogel mentors young singers, and lately it's Nancy Harms, who's in the house and takes a solo turn on stage with "It's Almost Like Being in Love" from Brigadoon. Perhaps in a musicals mood, Taylor tosses in a little "Surrey with the Fringe on Top" from Oklahoma. I like Nancy's voice and her broad, open vowels, and her red hat. 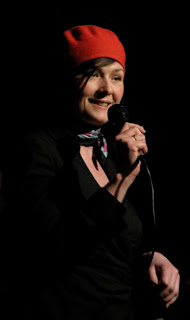 Fogel talks a bit about his latest CD, Transistor, a reissue of recordings he made in his 20s with a rock band called Batch. The word "transistor" recalls my phone interview with him earlier this week. What I thought would take maybe ten minutes turned into nearly two hours of conversation. We discovered something we had in common as kids with enforced early bedtimes: We both tucked transistor radios under our pillows and listened into the night through earbuds the size and shape (and hardness) of little acorns.

Fogel has made a career of radio as well as singing (and advertising, and other things). He reflected on this during the interview:

I've always been the vaudeville guy spinning plates. Get one going, tend to another one. I find myself talking to younger singers an awful lot now—a sign of venerability—and one of the main things I tell them is to stay focused. I spent so much time trying to figure out what I wanted to do when I grew up that I grew up before I figured it out.

Posted by Pamela Espeland at 12:38 AM