August Wilson: Gem of the Ocean 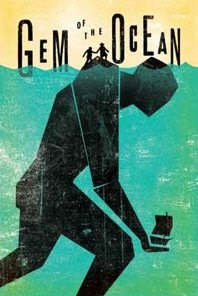 When: 4/24/08
Where: McGuire Proscenium Stage at the Guthrie

Writing for the Strib, Rohan Preston called Gem of the Ocean "coruscating." I had to look it up. The word means "to gleam with intermittent flashes: glitter, sparkle." It fits this production of the first play in August Wilson's Century Cycle—not the first he wrote, but the first chronologically in his series of ten plays, one for each decade of the 20th century.

Set in 1904, Gem is moving, mysterious, and profound. Is Aunt Ester really 287 years old? What happens to make Caesar treat his own people with such brutality? Can Citizen Barlow's soul be washed? Will Black Mary follow in Ester's footsteps? This is a Penumbra production, but it would have been too big for its home stage in the Halle Q. Brown/Dr. Martin Luther King Community Center; it needs the room it gets on the proscenium stage in the blood-red McGuire theater. (This is the reddest room I have ever been in. The walls are red, the seats are red--are the floors red? I think they are.)

There is one scene in particular, during which Ester leads Citizen and the other characters to the City of Bones, built from the bodies of slaves who died during the Middle Passage, where the action and the lighting would not have worked in a smaller space. During this wrenching and powerful scene, a woman seated in front of us quietly sobbed.

When I interviewed Van for my MinnPost column on Lady Day, I asked her how she ended up doing all of these things at once:

It's what we do as actors. We usually take on a few things, and I can kind of sum it up like this: "Being a woman is hard work. Not without joy or even ecstasy, but relentless, unending work." Maya Angelou said that. Yeah, I'm tired, and yeah, this is not easy, but I love it, I love going to work, and I budget my time and try to take care of myself and focus. You make time for what you love.

Many of the plays Van is involved with (including, previously, Ain't Misbehavin', Dinah Was, Blue, and Black Nativity) have music at their core. I asked if she sought that out or it just happened:

People seek me out to direct them or be in them or choreograph them.... I'm in half and half, half straight plays, half musical, but I always find rhythm. I'm always in something that has rhythm. Culturally, everything we do stems out of some kind of rhythm, how we walk and talk, how we communicate. It's jazz.

She noted that Gem is full of the rhythm of Wilson's language:

We try to be mindful about being spot-on with our words. Change one word and the rhythm is off.

I read the play before I saw it (truthfully, I finished the final act during intermission). That and talking with Van made me more conscious of the rhythm of the words.

Coincidence: My friend Jennifer Nelson, who led the African Continuum Theatre Company in Washington, DC for many years, is currently directing Gem of the Ocean at Everyman Theater in Baltimore. Read about it in the Baltimore Sun.
Posted by Pamela Espeland at 6:33 PM