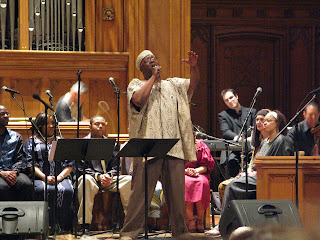 Bruce Henry is one of the good guys. He's been working for months on tonight's show, a benefit performance for The Dignity Center, an outreach ministry of Hennepin Avenue United Methodist Church that offers help, support and hope for homeless, poor and disenfranchised people. It's a festive and joyous occasion, deeply felt and genuine. 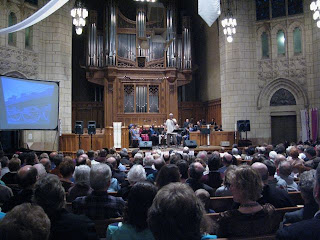 The theme: "Sheroes and Heroes: The Women and Men Who Risked All to Make This a Better World." Songs include "The Ballad of Harry Moore" by Bernice Reagon (founder of Sweet Honey in the Rock), about the first NAACP official killed in the civil rights movement; "Jump Dat Broom," Henry's song about his great-great grandfather; "Grandma's Hands" by Bill Withers; and Stevie Wonder's "A Time to Love."

The splendid Jevetta Steele sings "Great Is Thy Faithfulness," "This Little Light," and "Go to the Rock," prefacing some serious gospel by saying that even though this is a Methodist church, we're all about to become Pentacostals and Baptists. 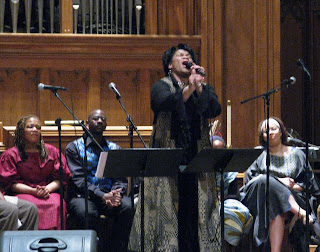 The live performance doesn't follow the printed program to the letter, the multimedia presentation (slides on a screen) has glitches, we can't see the dancers from where we're sitting, and the acoustics—the stone vault of the church sanctuary—are big and bouncy, but who cares. Bruce is Bruce and Jevetta is Jevetta and you can't ask for more. Because the printed program is mainly a formality, Henry adds his own "Africa Cries" and "Freedom Party," both perfect for the occasion. After the concert, there's a dessert reception in the lobby, with sheet cakes and cookies and brownies.

For more information about the Dignity Center, contact Ann Carlson, Director, 612-435-1336 or carlsonaj99@msn.com.
Posted by Pamela Espeland at 10:00 AM